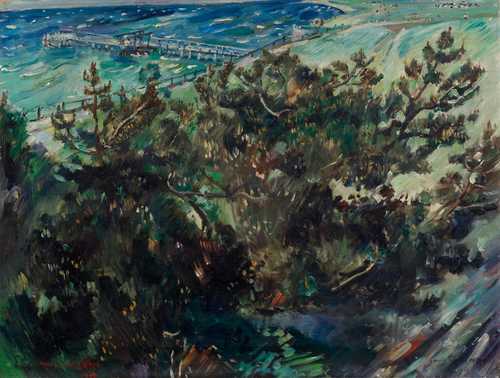 In 1884 Lovis Corinth enrolled at the Académia Julian in Paris, where he primarily learned the technique of perfect drawing and composition. It should be pointed out that, unlike many other artists, the French Impressionism movement did not influence Corinth’s method during his stay in Paris. On the contrary, Gustave Courbet's Realism, as well as an adoption of the alla prima technique and the painting of Wilhelm Trübner, were the driving forces that moved Corinth to open-air and landscape painting. Unlike the French Impressionists, the brushwork of their German contemporaries was not composed of short strokes and dabs of colour, but rather Corinth worked with long, broad and powerful brushmarks that remained bound to the depicted form. In contrast to France, there is no true dissolution of form by any Impressionist in Germany. Until 1912 Corinth rarely painted landscapes, yet increasingly approached this pictorial genre. "Landscape as such - without figures - is the most sensitive painting and comes the closest to music. Everything is woven in tones, and every change of mood also changes the appearance of the motif. (Corinth 1908, p. 26.)

The Corinth family spent the summer months of 1917 in the small, still young, resort town of Ostseebad Nienhagen for the second time. Together with 25 other guests, they stayed in a guesthouse called "Villa Erika". The resort is known for its beautiful beaches and for its old forest inhabited by century-old trees. There, away from the stress of everyday life, Corinth was able to relax. The present work is a result of these summer holidays. Particularly worth noting is the perspective which Corinth employed during the time of this work and which later became a prevalent means of staging his Walchensee landscapes. Packed with all his painting supplies, Corinth would repeatedly make the laborious climb up a raised tower in order to capture the view of the beach and the distance. The artist seems to have been surrounded by the large pine tree which occupies the main section and foreground of the picture. Visible behind the green of the tree are the beach promenade, the pier, the sea and a small part of the horizon. The expressive intensity is heightened through progressively swift strokes, which increased as Corinth gained experience. The troubled sea, with the foamy white waves and the almost coarse brushwork of the tree, in which the viewer can literally feel every gust of wind, imbues the picture with a stormy and typically Corinthian mood. "Landschaft bei Nienhagen" takes up Corinth’s favourite landscape theme: the elevated view over a seascape. This work was executed about one year before Corinth painted the first of his Walchensee works. The composition, the blue-green colour palette, as well as the increasingly expressionistic strokes, are already very reminiscent of the landscapes at Walchensee and therefore make our painting a form of precursor for the subsequent Walchensee landscapes.