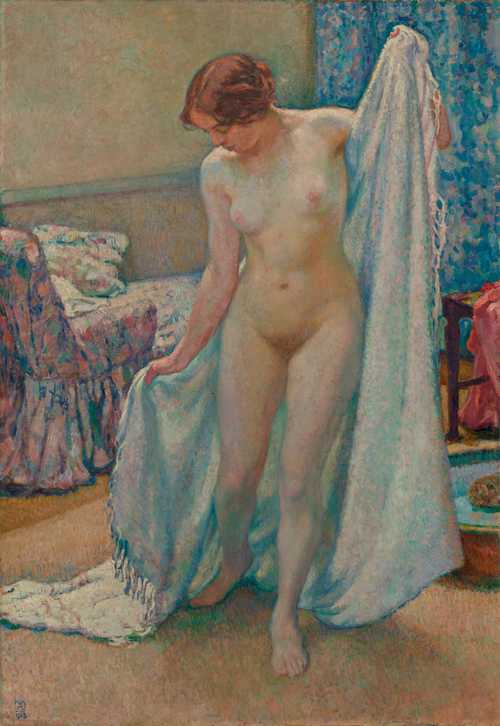 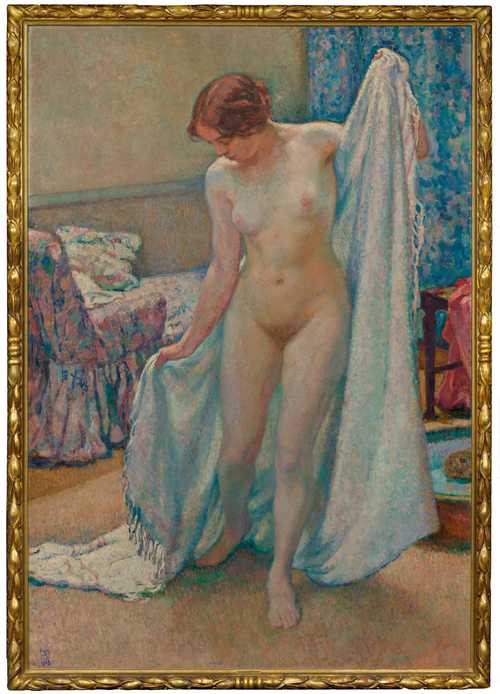 Théophile van Rysselberghe is the most important Belgian painter of the Neo-Impressionist movement and played a very decisive role in the art scene at the turn of the century.
Born in 1862 in Ghent, Van Rysselberghe grew up in a French-speaking, middle-class family. From 1879 onwards, he studied at the Académie des Beaux-Arts in Brussels under Jean-François Portaels, whose North African paintings triggered an Orientalist trend that also had a large influence on Van Rysselberghe. In his younger years, he undertook several trips to Morocco and exhibited in the salons of Ghent and Brussels. He then travelled to Spain with a friend and was very impressed with the works exhibited at the Prado. During that time he produced many portraits and captured the Mediterranean life, skilfully bringing the region’s predominate, intensive light to the canvas. These works, which he later exhibited in Belgium, were met with much enthusiasm. From that point on, light played a decisive role in his painting style. In October 1883, he was a prominent co-founder in the avant-garde group "Les XX", comprised of young, radical painters supported by the lawyer and art enthusiast Octave Maus.

Renoir and Monet also participated in the exhibition of the group in 1886. Van Rysselberghe was deeply impressed by the Impressionist technique, with which he then began to experiment. In that same year, when he visited the eighth Impressionist exhibition in Paris, it was the famous "La Grande Jatte" by Georges Seurat that finally led him to Pointillism, a manner which he employed in the subsequent years. This, however, was met with less success, as the public, especially in Belgium, was still very irritated by the style. Nevertheless, he continued to maintain intense contact to the Paris art scene for several years. On trips with his artist friend Eugène Boch, he travelled to the art capital, where he became acquainted with artists he very much admired such as Sisley, Signac, Degas and Toulouse-Lautrec. In general, he had a very good sense of recognising the avant-garde genius at an early stage. In a meeting with Theo van Gogh, Rysselberghe invited Theo’s brother, Vincent, to exhibit in Belgium, where he was able to sell his work "Vigne Rouge à Montmajour" to Anna Boch, long considered the only sale during Van Gogh’s lifetime.

In 1897 he finally moved to Paris. In those years, his Pointillist painting reached its climax. From around 1903 onwards, he no longer employed the technique as strictly and began painting with a stronger line and slightly freer manner. Certainly under the influence of the posthumously famous painters Van Gogh and Cezanne, and also under the newly emerging Fauvist tendencies, he sought to free himself from the somewhat stiff and technical painting style. In this, he was so successful that his later work is not considered to be a weaker period. On the contrary, right after giving up Pontillism around 1910, he found a painting style in which he depicted the light through strong colour contrasts. During that time he mainly painted in the South of France. Although the works are predominantly landscapes, famous from this period are the intimate portraits of his wife, his daughter, and his brother Octave. Nudes did not become important to Van Rysselberghe until late, from about 1905 onwards. They are rarely found in his work before that time; afterwards, nude depictions became one of his favourite themes. Similar to the works by Bonnard, Manguin or Lebasque, likewise working in the south, the artist experimented with the challenge of revealing the familiar, the intimate, without producing any indiscretion. As this view is captured on the canvas, a necessary tightrope walk emerges, which creates the effect of this painting type which these artists mastered so well. The present work is one of the most beautiful examples of this period. Van Rysselberghe painted this large nude (the largest nude in an interior in the entire oeuvre of the artist) in 1913, and exhibited it the following year at the Venice Biennale.

In life-size, the exposed woman stands in front of us after her bath and before the "Tub", the water-collecting basin that was often used during drying, and which lends its name to the title of the work. Like many of the portraits of the artist, this painting possesses an exciting intimacy. With a slightly blushed face, the nude dries herself. As an observer, the viewer finds himself in a somewhat shameful situation. This is very typical in these works by Van Rysselberghe, which deal with the attention of the viewer: "He painted nudes under pine trees, after bathing, lying down and relaxed, at their toilet in front of the mirror, doing their hair, washing in the bath... His nudes painted in interiors, just like his portraits, illustrate the same desire to focus the spectator's attention on the subject. The background never competes with it, but remains neutral." (Exh. Cat. Théo van Rysselberghe. Centre for Fine Arts, Brussels & Geementmuseum, The Hague, 2006, p. 69).