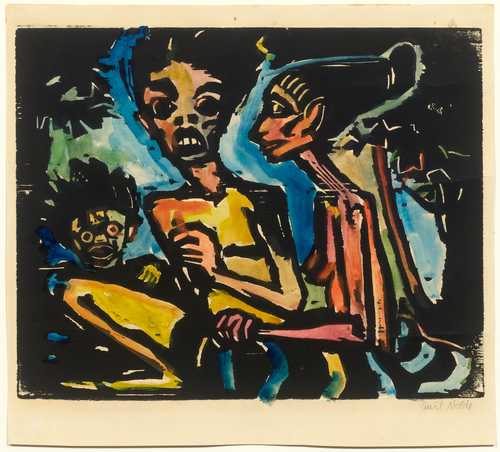 “I want so much that my work grows out of the material.” Emil Nolde

The present woodcut “Familie” by Emil Nolde from 1917 is a rarity amongst his prints, as it is one of the few prints Nolde coloured himself, thus giving it its unique status. With his usual mastery, Nolde skilfully uses bright colours, contrasted with the dark woodcut to reveal a very special effect. They create a more intimate atmosphere by emphasizing the unity of the family and at the same time, the contrasts to the contoured woodcut are much softer. The effect of depth also increases with the use of colour.

The woodcut plays an important role in Nolde’s works and the present piece is an outstanding example of his expressionist prints. Unlike with his paintings and watercolours, he does not continually focus on prink making, only for about two decades, mainly in the years 1906, 1912 and 1917/18. The piece “Familie” is from 1917. Typical for this phase, the artist draws upon his experiences travelling the South seas and invents fictitious scenes of the primitive peoples. Surrounded by trees, a family sits at the centre of this work – the woman in profile, the man frontal to the viewer and the child looking over the angled leg of the father. The edgy faces, scrawny bodies, the representation as nudes in nature, the eccentric hairstyle of the mother and tangled hair of the father and son, are reminiscent of Nolde’s oil painting “Papuajünglinge”, today owned by the Prussian Cultural Heritage Berlin. The woodcut demands a great deal of skill and force from the artist, which is why the Expressionists liked to use it to underline the original and essential in their art. “With the material in your hand, between your fingers, the works of the primitive peoples are created. The absolute originality, the intensive, often grotesque expression of force and life in the most simple form – that should be what gives us pleasure in these aboriginal works.” (Quote Emil Nolde, in: Schiefler, Gustav: Emil Nolde. Das graphische Werk. Vol. II Holzschnitte, Lithografien, Hektographien, Cologne 1996, p. 11)