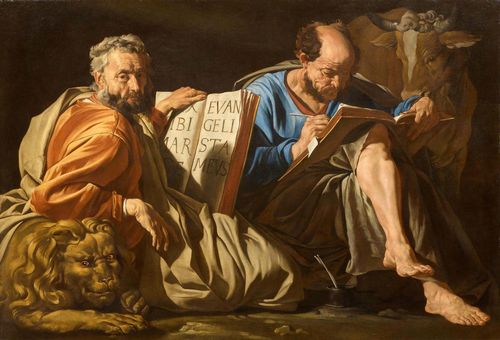 返回
拍品 3029*
MATTHIAS STOMER
The Evangelists Mark and Luke with their attributes, the lion and the ox.
Oil on canvas.

(Amersfoort circa 1600–after 1650 Sicily)
The Evangelists Mark and Luke with their attributes, the lion and the ox.
Oil on canvas.
113 × 154 cm.
Provenance:
- Trafalgar Galleries, London, 1976.
- European private collection.

This painting is the key to the exciting discovery and felicitous reunion of a pair that were once torn apart by the ups and downs of history. In the year 1963 doctoral students at Columbia University in New York drew up an inventory of the University's art collection. A severely darkened and partly overpainted picture attracted the attention of John Walsh, future Director of the Getty Museum; however, it couldn't be assigned to any artist at first. Years later, Walsh mentioned the New York work to the British art historian Benedict Nicolson. This immediately reminded him of a painting that he happened to have just seen on the London market, namely our "Evangelists Mark and Luke with their Attributes the Lion and the Ox."

Our painting was brought to the USA and compared with the University's work. The two were identified as a pair of rare quality depicting the four evangelists by Matthias Stomer. A restoration by the Metropolitan Museum brought to light areas of the university's picture freed of their overpainting. It now shows the attributes of John, an eagle; and of Matthew, a tender, thoughtful angel looking over his shoulder (see Ill. 1).

The symbols, decisive for the identification of the evangelists,
go back to Old Testament sources, which are picked up again in the New Testament. In the Revelation of John it is said that four creatures stand around the throne of God: "And the first beast was like a lion, and the second beast like a calf, and the third beast had a face as a man, and the fourth beast was like a flying eagle." Since the 4th century these symbols were assigned to the four evangelists.

While Matthew and the young John hold an animated discussion in the Columbia University painting, Mark and Luke in our picture are shown in relaxed attitudes. Mark, his right forearm propped lightly on the lion, seems to gaze at us, the viewers, thoughtfully; his left arm clasps a large book in which - partly hidden by his hand - a Latin inscription is visible: "PAX TIBI MARCE EVANGELISTA MEUS", which translates as: "Peace be with you, Mark, my evangelist".

This salutation is associated with the theft of the remains of St. Mark the Evangelist from Alexandria by two Venetian merchants in the year 828. The relics were transported to Venice, where the previous saint of the city was immediately replaced by the famous evangelist and a legend arose, according to which the evangelist had been greeted at the lagoon by an angel with these words - the perfect justification for the theft and legitimation of the new resting place. The greeting "Pax tibi" is frequently found together with the evangelists, in Venice often only with the lion.

Luke, who with the ox in the background at right is absorbed in writing his Gospel, has swung his left leg over the other, his bare feet clearly visible. Here the Dutch painter Stomer, who can be documented at Rome in 1630 when he was about thirty years of age, drew inspiration from a painting by his great idol Caravaggio (1571-1610), then regarded as scandalous. Caravaggio (originally Michelangelo Merisi), who employed both chiaroscuro, the dramatic light-dark contrast of illumination and shadow, and also a highly realistic depiction of the saint in the painting, made a particularly deep impression on painters from the Netherlands. Stomer was also one of the circle of "Utrecht Caravaggisti" in Rome. Originally he came only to study in Italy, but Stomer never returned to the Netherlands and eventually settled in Northern Italy after working in Naples and Rome.

In Rome Stomer must certainly have seen Caravaggio's "The Evangelist Matthew with the Angel", a painting that he had produced in 1602 as a commission for the Cappella Contarelli in San Luigi dei Francesi in Rome, which had however been rejected. Caravaggio in fact represented the evangelist cross-legged and barefoot, a depiction criticized as unequal to his dignity. However, the Caravaggio collector Marchese Vincenzo Giustiniani (1564-1637) convinced the congregation to let the painter do another picture of the evangelist - a relatively "tame" variant, which is still in situ - and acquired the more interesting first version, which came to Berlin in 1815. Unfortunately, this work has been missing since the war year of 1945 and is preserved only in black-and-white photographs. Our painting, which demonstrates Stomer's extraordinary capacity for psychologically complex depictions of individuals and his outstanding painterly skills, is a worthy continuation of this great masterpiece.