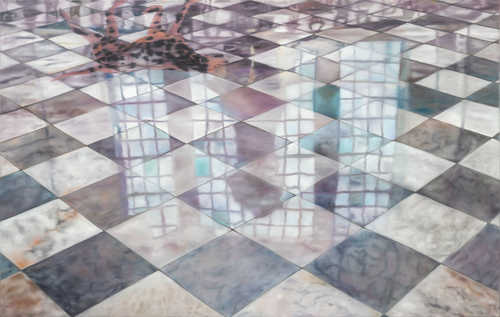 (Marl 1957–lives and works in Düsseldorf)
Untitled. 2005.
Oil on canvas.
Signed and dated on the reverse: Karin Kneffel 2005.
120 x 190 cm.
Provenance:
- Galerie Christine König, Vienna.
- Purchased from the above by the present owner, since then private collection Switzerland.

Born in Marl in 1957, Karin Kneffel first studied German language and literature and philosophy in Münster und Duisburg. It was not until she was 24 that she decided to study at the Art Academy in Düsseldorf, where she first attended classes under Johannes Brus and Norbert Tadeusz and then became a master student of Gerhard Richter. In 1987 she successfully completed her studies in Düsseldorf. There followed a number of scholarships, including the Karl Schmidt-Rottluff scholarship in 1991 and the Villa Massimo scholarship in Rome in 1996. In 1998 she became visiting professor at the School of Art in Bremen, and 2 years later at the Iceland Academy of the Arts, Reykjavik. From 2000 to 2008 she received a professorship at the School of Art in Bremen and an appointment to the Academy of Fine Arts in Munich.

Karin Kneffel first became known for her depictions of animals and fruits. In the early 1980s when the “Neue Wilden” with Elvira Bach and Helmut Middendorf were in vogue, Kneffel deliberately chose small format animal depictions of goats, cattle and sheep. These were based on a format of 20 x 20cm, in which each animal, whether it was a goat or a cow, was depicted the same size. In addition, these animal portraits enabled the young painter to explore the traditional genre of portraiture, while being completely free, since there was no need to take into account the feelings or wishes of the sitter.

In her fruit still lifes she focussed on details, thus further extending the classic still life. These works are surrounded by a fascinating, almost mysterious aura, created by the numerous mirror and light reflections.

With architectural and art history motifs, the past and present merge. Kneffel therefore accessed architectural motifs on old photos, used these as an underlying concept, but then shifted the space through small alterations in the present. Her interior views are striking for their reflections and various pictorial planes, which Karin Kneffel combines superbly, as we see in the present work.

We look at a shiny marble floor, in which the window and a large sculpture are reflected. On the upper edge there is a further reflection of a Dalmatian, but which does not appear to fit into the composition, because it is on another pictorial plane, as is typical of Kneffel. Although the individual compositional elements are clear and appear simple, the artist presents the viewer with the great challenge of different pictorial planes and overlapping perspectives. At first sight, the viewer thinks that they have easily grasped the composition, but then is unsettled by the different perspectives and pictorial planes. To make matters worse, the viewer perceives that there are different levels of time and depth, but the absence of a sense of space causes yet further uncertainty.

Karin Kneffel is one of the most important German contemporary female artists. Often described as a realist artist, there is hardly a painter who has so skilfully unsettled and questioned our concept of reality and our perception.