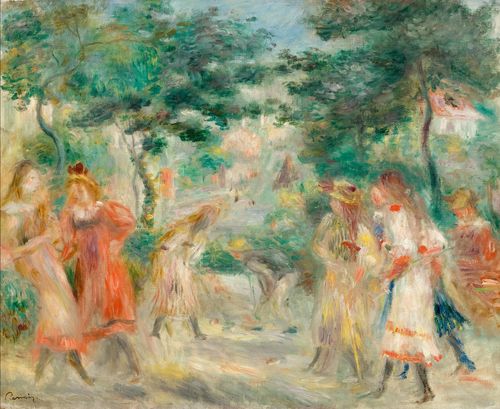 (Limoges 1841 - 1919 Cagnes-sur-Mer)
La partie de croquet (Enfants dans le jardin de Montmartre). Circa 1895.
Oil on canvas.
With signature stamp lower left: Renoir.
46.5 x 55.5 cm.
The authenticity of this work has been confirmed by the Wildenstein Institute, Paris, 24 September 2007. The work will be included in the Catalogue critique.

“Towards 1883 there was a kind of rupture in my work. I had come to the end of Impressionism and reached the conclusion that I could neither paint nor draw. In a word, I had reached a dead end…”. (Renoir to Vollard, cit. after H. Grabers, p. 235f.) In the early 1880s, Renoir fell into a crisis, which led him disengage himself from his Impressionist style. Thereupon he travelled to Italy, where he studied closely the painters of the Renaissance, especially Raphael. Enthused by their techniques, he began to introduce new pictorial elements into his works. He moved closer to the classical style and again set great store by the human form and most especially a finely detailed painting style – which is easily recognised in “Le Grand Baigneuses” of 1884.

From the 1890s there was again a break in Renoir’s work. His painting moved in an almost opposite direction. He gave up his recently discovered interest in well-defined forms and replaced this with almost blurred contours. The detail and the three-dimensional quality no longer played a central role. Rather, from the works in this period, of which the present painting is an example, we recognise a longing for artistic freedom. The present work was produced in the mid 1890s, which is a comparatively little-known phase of Renoir’s work. In 1890 the Renoir family moved to Montmarte, where the artist rented a studio in the Chateau des Brouillard between 1893 and 1895. There the garden served as an important source of inspiration, around which various works were produced. The present work is a fine example of Renoir’s open air painting, which he used particularly at this time. His model in this respect was Camille Corot, whom he considered the greatest of all landscape painters. Renoir often painted everyday scenes: women in a garden are a favourite motif for him, which one encounters again and again in his work. The present painting exudes, as in Renoir’s entire oeuvre, a positive and life-affirming atmosphere, which is characterised by the loose style and a fleeting brush stroke. This brushwork brings the viewer to a closer understanding of how important it was for Renoir to capture perfectly the scene, the colour and the light in one moment.

The decisive feature of the 1890s is a sequence of pictures showing the carefree and idyllic existence of pretty bourgeois women and girls in summer dresses and hats. The connection between man and nature was very important for Renoir. The work presented here at auction shows a group of girls in the garden at Montmartre. Some are playing croquet, while others are deep in conversation. In the same year, Renoir painted “Deux Filettes dans le Jardin”, which is a detailed extract of the painting presented here. Which of the two paintings was produced first and therefore served as model, is unknown.

Sold for CHF 733 500 (including buyer’s premium)
All information is subject to change.