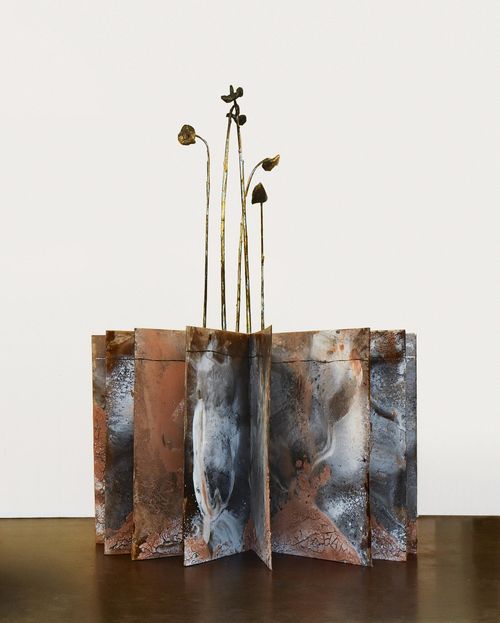 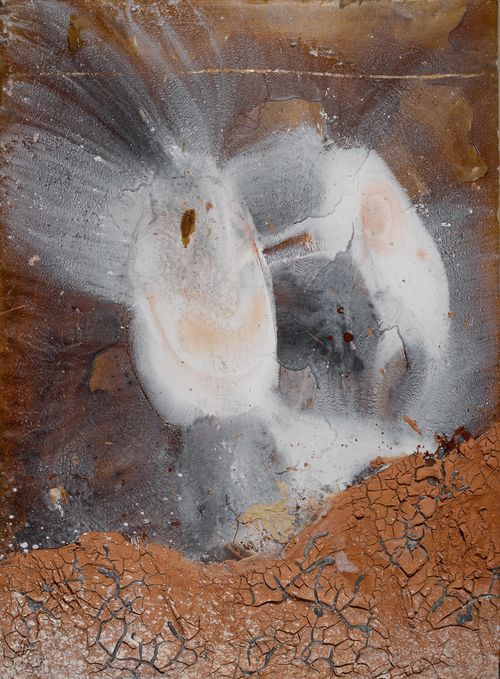 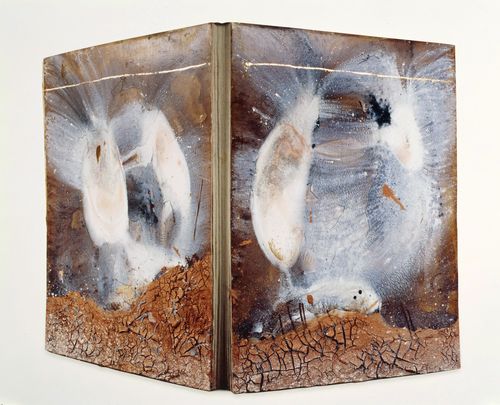 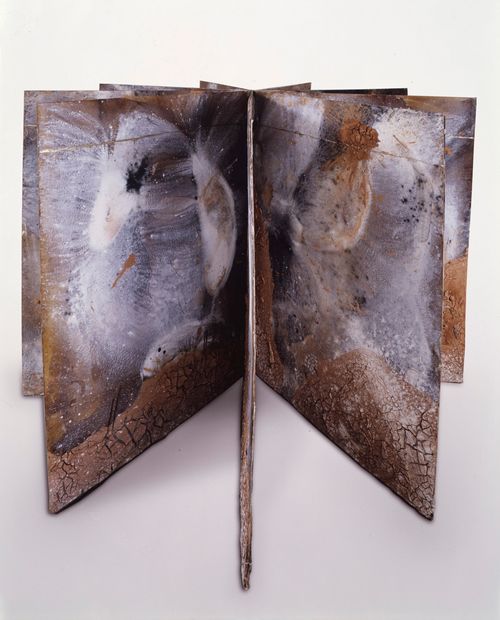 (Donaueschingen 1945 - lives and works among others in Paris)
Nigredo-Albedo-Rubedo. 2006.
Oil, emulsion, lead, wood, terracotta soil, fabric and wire, also 5 dried sunflowers. Bound as a book with 9 pages, each page consisting of cardboard and fibreboard.
Each 196 x 140 cm. Sunflowers max. 430 cm.
Provenance:
- Acquired from Galerie Thaddaeus Ropac, Paris, by the present owner in 2007/2008.
- Since then private collection.

Anselm Kiefer is born in Donaueschingen, two months before the end of the war. His childhood in a bombed post-war Germany was to influence his art significantly. Already as a child, his artist interests and talent were apparent. After abandoning his studies in jurisprudence, he enrols in an art course with Horst Antes in Karlsruhe, later moving to Düsseldorf under Joseph Beuys as his mentor. With Beuys he shares a fascination and preference for unusual materials such as lead, ash, earth, sand, flowers and straw. His works are influenced by history, and he is often described as a modern history painter. German history, the ruins and landscapes, as well as mythology and Kabbalah are just some of the themes which run through his entire work; although it is the way in which he deals with the subject of German history which makes his oeuvre unique. In his works he holds up a mirror before man, showing us old historical wounds for contemplation and urges towards rehabilitation.

In his early works, Kiefer asks the question whether, after the Holocaust and the appropriation of culture and art by the National Socialists, it is still possible to be a “German artist”. His works therefore examine unflinchingly the subject of history and seek to excavate, to awaken consciousness, and to transcend. Using immense formats, and various materials and techniques, Kiefer addresses these themes. With expressive, powerful application of colour, various layers of paint, emulsions, blowtorches, collage, photographs, inscriptions and pictures, these works become multi-layered documents, in which the process of creation and painting technique become the subject itself and which support and elucidate the overriding intention of the work.

His career begins in 1969 with a scandal: in the series “Besetzungen” he performs the Nazi salute in various German towns. The public indignation is great, but it is a way for him to address what has happened, to critique, and to identify with his own history and the fact of being German. An exhibition of a series with Biblical and German mythological themes follows in 1973. The pieces are inscribed with names, quotations and inscriptions, as is typical in his work. Monumental landscapes such as “Märkische Heide”, a motif which he uses occasionally as a symbol of the Prussian character, also follow. Kiefer is often described as a landscape painter – although he does not see himself as such – for landscapes are a leitmotif of his oeuvre. The land is imbued with human events and their history and forever marked by these incidents. These wounds, traces and signs are a source of fascination, but also represent the profound meaning of his work. His first installation “Die Frauen der Revolution” takes place around 1984. It comprises of thirteen beds of lead, spread with crumpled lead sheets and an indentation filled with water at the centre. Each bed bears a paper label with 22 names of women who played an important role in the French Revolution. Further large scale works in lead, such as his famous aircrafts, rockets and books emerge.

The present large format book presents a number of details, patterns, materials and techniques: oil, emulsion, lead, wood, terracotta soil, fabric and wire, as well as 5 dried sunflowers. On some pages giant sunflowers grow from the terracotta soil. Kiefer employs his materials with great effect in order to display before the viewer qualities of death and transience in nature. The sunflowers are dried, partly charred; the earth is broken up and the fragile terracotta inevitably crumbles. The melancholy aesthetic is increased with the predominance of his preferred colour grey. Indeed, the enormous scale of the work conveys a feeling of the baleful and monstrous experience of this dark landscape. Yet, even in this meagre scenario, there are promising details to be found, which suggest a possible imminent transformation. The white accents, which emerge in an almost circular movement from the dark backdrop and the fine golden lines on the upper edge, might suggest change; and even if the sunflowers are dried, they nevertheless have a positive connotation.

Even the title of this work “Nigredo-Albedo-Rubedo” is powerfully symbolic and clearly illustrates his interest in European mysticism. These three words originate from the “Opus Magnum” of medieval alchemy, in which the transformation of a material into gold is split into four and later three stages: Nigredo – blackneing, means the beginning and the original state of the material; there follows Albedo – whitening, and citrinitas – yellowing (this step is later removed); finally, the transformation: rubedo – reddening. Running parallel to the practical alchemy, as it were, these concepts are also taken up by Western mysticism. Thus the aim is no longer the transformation of a material into gold, but the perfection of man. A possible translation might be found in the work of Gustav Meyrink (1868-1932): nigredo (blackning) – individuation, cleansing; albedo (whitening) – spiritualisation, enlightenment; rubedo (reddening) – unification of man with God, unification of the limited with the limitless (see: wikipedia Alchemy). Thus the title symbolises a possible positive transformation.

Sold for CHF 360 500 (including buyer’s premium)
All information is subject to change.