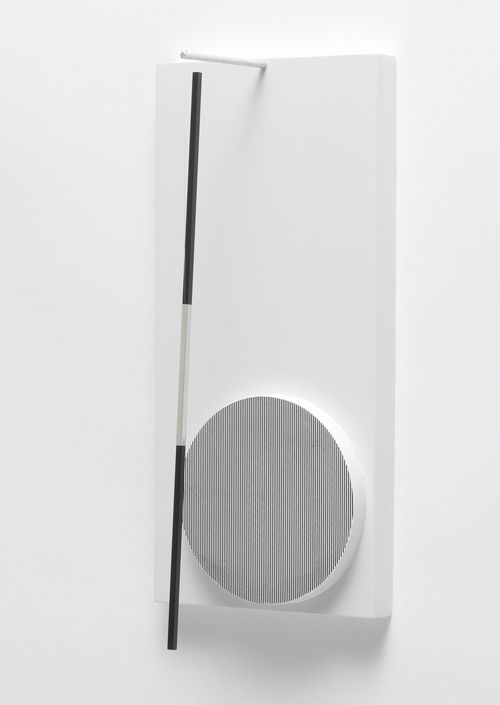 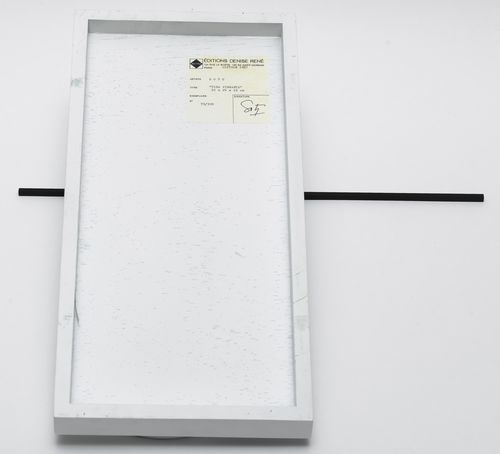 (Ciudad Bolivar/Venezuela 1923 - 2005 Paris)
Tige vibrante.
1967.
Multiple. Wood, silkscreen, oil, nylon. 71/100. On the backside signed on the label: Soto. 50 x 24 x 16. Published by Galerie Denise Renée, Paris (with the label).
Jesús Rafael Soto’s art belongs to the OpArt movement of the 1960s, which consciously distanced itself from PopArt. The point of departure for OpArt is a new way of seeing - a position already claimed by Pointillism and Impressionism by the turn of the 20th century, and then taken to its full extreme by Josef Albers: "Albers does not let the eye rest; the forms and colours resist any attempt at a definitive position. Moreover, colours alter due to their juxtapositions. This gives apparently simple forms, even the square, their iridescent ambiguity. This is the intrinsic theme of his painting. What is visible is the conflict between the physical fact and the psychological effect. The entire experience of the viewer is put into question." (cit. Walther, Ingo F. (ed.): Kunst des 20. Jahrhunderts. Teil I. Malerei, Cologne 2000, p. 345).

While Bridget Riley and Victor Vasarely occupied entirely opposing positions within OpArt, the Venezuelan artist Soto adopted a mid-way position. He combined OpArt with elements of Kinetic Art, which was a logical development. The confusion experienced by the eye leads it to move more and also produces the impulse to move the artwork itself. Despite the different approaches within this art movement, there are decisive, common characteristics: "All Op-Artists have in common their refusal to allow the viewer’s eye to rest; the denial of a holistic composition; the compulsion towards ever-new ways of seeing; the effacement of the individual hand, and the withdrawal of the artistic personality behind the objective optical event." (cit. Walther, Ingo F. (ed.): Kunst des 20. Jahrhunderts. Teil I. Malerei, Cologne 2000, p. 347).

Sold for CHF 9 375 (including buyer’s premium)
All information is subject to change.