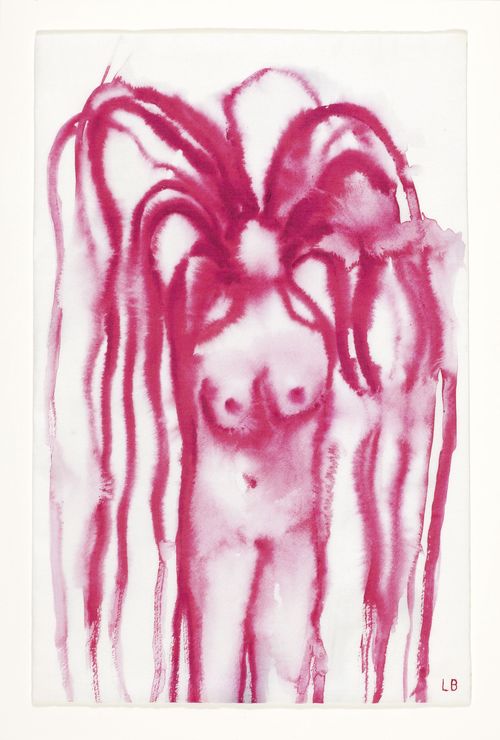 “The people I most admire are interested in portraits, in the symbolic and recognisable unique essence of a person. I, on the other hand, am interested in the portrait of a relationship, in how a relationship can be woven, in the influence which people have over one another.” (cited Louise Bourgeois, in: Crone, Rainer/Graf Schaesberg, Petrus: Louise Bourgeois. Das Geheimnis der Zelle, Munich, 1998, p. 49)

Wild, irrepressible and defenceless, the “Girl with Hair” steps towards the viewer. The wild hair standing in peaks frames the anonymous face as well as the naked body of a woman. Nothing in this image is restrained: not the aggressive red colour, nor the flowing, spontaneous lines, nor the composition which fills the page, nor the defenceless girl. The young woman depicted here enters directly into a relationship with the viewer, will not let them go, follows them with her eyeless gaze. It begs the question, Towards what? Why? Who? The viewer is immediately in dialogue with the image, except that they then automatically block out the image to protect themselves. But that is also a form of reaction, of communicating with the subject.

Louise Bourgeois, one of the most important and influential sculptors of the 20th century, brings together in “Girl with Hair” some of the central themes of her work. There are the basic themes of humanity, such as birth and death, fear and love, the human body and sexuality. This is why her works can be understood intuitively, even if, because of the many layers, they remain puzzling. The vulnerable femininity on display, combined with a colour, which with its red tone and its haziness gives rise to associations of blood, as well as the hair reminding us of spider legs, allow for a multiplicity of interpretations, which makes the full dimension of this picture hard to grasp. At the same time, the symbolic elements touch the viewer very emotionally, galvanising them: “My work unsettles the viewer, but no one wishes to be disturbed.” (ibid, p. 11)

Louise Bourgeois was born in Paris in 1911 and moved with her husband, the American art historian Robert Goldwater, to New York in 1938. In the 1920s in Paris, she had already taken drawing lessons, and had enrolled initially at the Sorbonne to study philosophy and mathematics, before deciding to study art. It was only in 1982, at the age of 77, that she achieved recognition as an artist with her first large retrospective in the Museum of Modern Art, New York. Bourgeois attracted wide attention internationally with her participation in Documenta 9 in 1992 and the Venice Biennale in 1993. Today she is one of the most renowned female artists in the world, and has been honoured with numerous international solo shows. Louise Bourgeois died in New York in 2010.