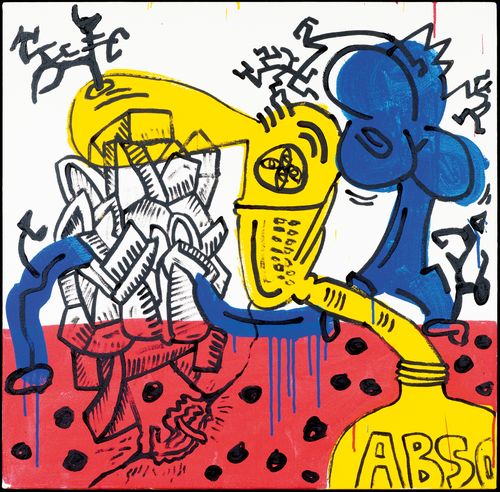 Sold for CHF 408 500 (including buyer’s premium)
All information is subject to change.

Keith Haring was born in Reading Pennsylvania in 1958 and learned to draw at a young age. Through his father, an engineer and amateur caricaturist, he began to enjoy cartoons. He soon dropped his studies at the Ivy School of Professional Art in Pittsburgh, as he did not wish to pursue a career as a commercial graphic designer. Now certain that he wished to make a real commitment to art, he moved to New York in 1978 and enrolled at the School of Visual Arts. There Haring encountered a flourishing art scene and soon met other artists such as Andy Warhol, Jean-Michel Basquiat, Kenny Scharf and Madonna. In addition to the energy of this scene, he was also inspired by artists such as Jean Dubuffet, Pierre Alechinsky and Christo. He developed his own unmistakable style: the graphic expression, the predominantly strong black line, the lively colours and art in public spaces. Even when he experimented with performance art, video and other media, drawing remained his primary medium. In the early 1980s he used the black panels on the subway in order to draw non-stop. These “Subway drawings” helped him to process thoughts and ideas.

In 1981 Haring exhibited for the first time at the Wesbeth Painters Space and in 1982 there followed a solo show at Tony Shafrazi in New York. At the same time he took part in documenta 7 in Kassel, the Sao Paulo Biennale and the Whitney Biennale. This success was also demonstrated in his large public works, for example clock designs for Swatch and a campaign for Absolut Vodka.

After having been diagnosed with AIDS in 1988, in the following year he set up the Keith Haring Foundation, which provides financing and graphic material for AIDS organisations as well as programs for children. It is also dedicated to expanding the audience for his works through exhibitions, publications and the licensing of his pictures. He used many of his late works to raise awareness for AIDS.

In the mid 80s Haring spent some time in Paris, where, amongst other places, he often spent time working in the studio of his friend George Condo. At that time Condo was working on extended canvases, endless automatic works in which every part of the canvas was filled with small figures and other objects. Keith was also influenced by these pictures and this style of composition and produced his own densely crafted works. Condo writes about this period in Paris: “Keith opened up a new direction in painting, and it was interesting for him to come to Paris. He was thinking in terms of Calder-like, Léger-like large colour surfaces, which he then covered with drawings, and in leaving a white space around the forms... he began to combine specific pictures with one another, broke the margins a bit and made them look more painted and less graphic…He made a couple of things in the style of the Cubist period, but then introduced his graffiti-like approach. Keith wanted to keep the abstract language of Léger, Kandinsky and Klee and definitely the black and white sculptures of Dubuffet” (cit. George Condo in Ditch, Jeffrey/Geiss, Susanne/Gruen, Julia: Keith Haring. New York 2008)

These new approaches and influences are very clearly present in the work offered at auction here, as well as the entire series “Red Yellow Blue”. The series was painted from 11 to 13 January 1987 and comprises 26 pictures, which were later shown at the Tony Shafrazi Gallery in New York. Our picture came shortly afterwards, for the birth of André Heller’s son, from his collection, and therefore bears the dedication “FOR FERDINAND Keith”.

Sold for CHF 408 500 (including buyer’s premium)
All information is subject to change.