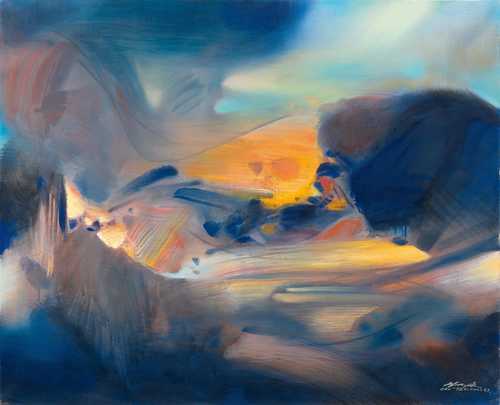 Provenance: Directly purchased from the artist by the present owner in 1987, since then private collection Switzerland.

Chu Teh-Chun was born in 1920 in the Chinese Province of Jiangsu (today Anhui Province) the youngest of three sons in an affluent family of doctors. His father and grandfather were scholars and collectors of Chinese painting and calligraphy.

With the support of his family, at the age of 15 he entered the National School of Fine Arts in Hangzhou, which was led by the much-travelled Lin Fengmian, who possibly later inspired Chu Teh-Chun to move to France. He attended courses in both Chinese and Western painting, where he met the artists Wu Guanzhong and Zao Wou-Ki, with whom he shared a lifelong friendship. All three were to influence one another. After graduating in 1941 he was hired as assistant professor and later made professor at the renowned Nanjing University. With the rise of the Communist Movement in China, Chu Teh Chun moved to Taiwan, where from 1951 he offered courses in Western Art at the National Taiwan University. In March 1955 he travelled to Europe with stays in Hong Kong, Saigon, Sri-Lanka (then Ceylon), Port Said, Cairo, where he discovered Egyptian art, and finally reached Paris via Marseille.

The abstract painting of Nicolas de Staël inspired Chu Teh-Chun. Within just a few years, in 1958 he had his first exhibition, followed by international exhibitions at the Carnegie Museum of Art in Pittsburgh in 1964, in Jerusalem and Athens. He also participated in the Sao Paulo Biennale in 1969. At the beginning of the 1980s his fame also began to grow in Asia. In 1987, the same year that both of the present paintings were produced, Chu Teh-Chun returned to his homeland as a visitor for the first time in thirty years, in order to be present at the retrospective of his life’s work at the Historical National Museum in Taipei. Exhibitions in the most important museums of the world then followed. From 1997 he became member of the Académie des Beaux-Arts in Paris. Chu Teh Chun died in Paris in 2014 at the age of 93.

Chu Teh-Chun was a master of Lyrical Abstraction. His works reflect a spontaneous improvisation and appear to reproduce his artistic feelings directly. He employs a broad palette, in order to allow the colours, in an almost meditative style, to dance on the canvas like an erupting volcano or the flames of a fire. Chu Teh-Chun also appears to play with the plasticity and ductility of the colour pigments. The flowing lines and fluid colour surfaces appeal to the viewer’s imagination: clouds, mountain landscapes, rock formations or waterfalls emerge before the inner eye. The compositions on the canvas may burn brilliantly with colour, produce great depth and density, movement or renewal, a sense of fading, sunrise or sunset, brightness, or at the same time mystery. The viewer is lost in a splendidly abstract landscape painting.

Chu Teh-Chun’s paintings skilfully reflect the pristine and pure feeling of the artist’s love of nature, and the expert connection he made in his technique between Asian and Western artistic influences.