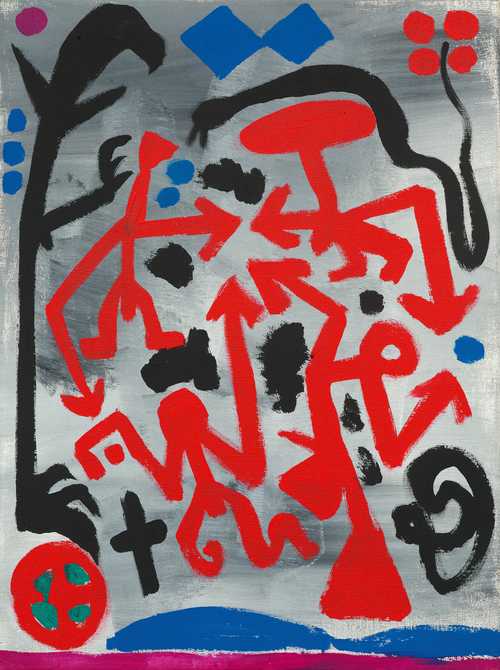 Born in 1939 in Dresden, A.R. Penck (real name Ralf Winkler) grew up in the German Democratic Republic under the influence of socialist ideas, which shaped his art decisively.
In the 1950s he first attended a painting course with Jürgen Böttcher (better known as Strawalde) and became a member of the group Erste Phalanx Nedserd, who allied themselves against artistic compromise of any kind, and consequently sacrificed their entry into the Academy of Fine Arts. At the beginning of the 1960s, Ralf Winkler became increasingly involved with information theory and other scientific disciplines. He now also made use of the pseudonym A.R. Penck for the first time, which was borrowed from the geologist Albrecht Penck, who had researched the Ice Age, and represents a parallel to Winkler’s efforts to research the pictorial world. His interest was in the development of a pictorial language based on a simple system of signs, which it would be possible for everyone to decode. The result was a radical reduction in form to a series of outlined stick figures, which he called “Standart”, in reference to the signals associated with commonly known standard symbols. He thereby achieved an abstraction of complex, socio-economic situations in flat, pictorial compositions infused with symbolism. A.R. Penck’s confrontation with the politically divided reality of his time, was expressed not least in the fact that he was shown in the West at Documenta 5 and 6, as well as being honoured with a retrospective at the Kunsthalle in Bern, while in East Germany itself he was denied membership of the visual arts association. However, A.R. Penck did not limit himself to his own experience of the conflict between the two Germanies. Focus points and relationships of tension interest him as phenomena of human society in general.

This is revealed in the work offered here at auction - a dispersion on canvas entitled “Libanon II”. The strong colour contrast between the violet background and the red key figures which stand out against it, is as crucial to the pictorial composition as the arrows of the same figures converging in the centre, which clearly indicate an armed conflict. Additional signifiers such as the Christian cross or the snake symbolise the overall impression of the Lebanese civil war in the 1980s which underpins the work. The pictorial canon devised by A.R. Penck thus enjoys a universal validity which makes his compositions timeless.

A.R. Penck today is regarded as an important precursor to the artistic generation of Damien Hirst and Julian Schnabel. The relevance of his theories of image-making in contemporary art has been reflected in the various prizes and many retrospectives, including for example the solo exhibition at the Frankfurter Schirn Halle in 2007. A.R. Penck died in May 2017 in Zurich.

Sold for CHF 43 700 (including buyer’s premium)
All information is subject to change.