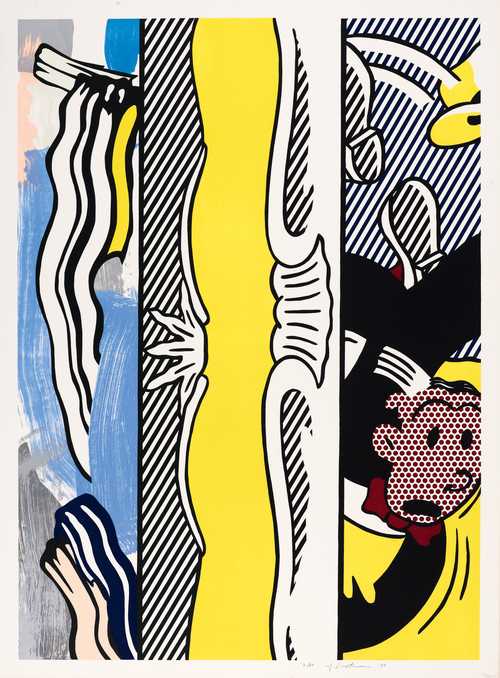 In his large-scale print “Two Paintings: Dagwood” from 1984, Roy Lichtenstein proves his outstanding talent as a print maker. With woodcut and lithography, he masterfully combines two different printing techniques, which he also designs in colour. Furthermore, the composition is very complex, for as the title suggests, he portrays excerpts of paintings in the works, meaning he must, in this present case, choose two details, which then work as a composition. On the left-hand side, we see an abstract painting, reminiscent of Lichtenstein’s Brushstroke painting; opposite he sets a detail from a painting with the comic figure “Dagwood”. The latter makes the work distinguishable as a work by Roy Lichtenstein at first glance, who has used comics from the very beginning as model for his works. Dagwood is from the comic series “Blondie” from the 1930’s/40’s. It is known for its huge sandwiches, after which actual sandwiches were then named.

Technique and composition are so complex and intricate, that Lichtenstein first completed the drawing and collage, which he handed over complete to the printing company. With other prints, he only completed the collage during works at the printers. The choice of details, their composition and the decision, at which point to use lithography or woodcut, made exact preparation necessary.

Born in New York in 1923, Roy Lichtenstein, along with Andy Warhol, belongs to the most influential artists in Pop Art.

Sold for CHF 41 300 (including buyer’s premium)
All information is subject to change.