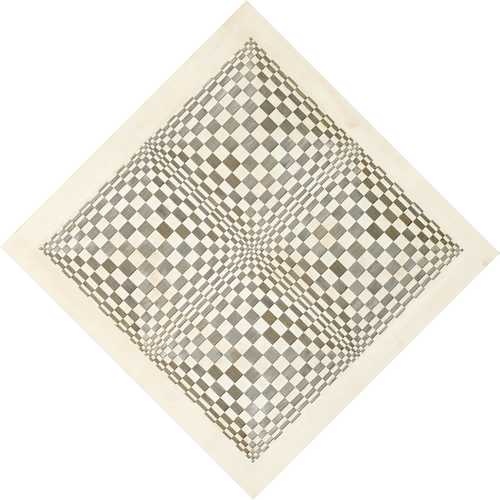 (1930 Milan 2004)
Oggetto Ottico Dinamico. 1965.
Milled aluminium on wood.
On the reverse titled, dated, inscribed, signed and with the measurements: OGGETTO OTTICO DINAMICO DADAMAINO 1963 cm 50 x 50 dadamaino.
50 x 50 cm.
We thank the Archivio Dadamaino for its scientific support and for the indication that the signature in writing is very rare.

"Dada Maino has overcome the ‘problem of painting’: different parameters inform her work: her paintings are the flags of a new world, they are a new meaning: they are not content with ‘saying something different’: they also say something new”.
(Piero Manzoni, 1961)

In the 1950s and 60s the world was in upheaval and, even within art, artists were questioning its traditional concepts. Lucio Fontana was the one who, with a simple slash of the canvas, broke with centuries of artistic tradition, and enabled future generations to experience an unbelievable freedom in their thinking and to put it into practice. This new generation of the avant-garde, indebted to Fontana, who demanded and implemented a radical revision of ideas, included Piero Manzoni, Enrico Castellani and Dadamaino. Manzoni wrote to them in 1961: “The emergence of new conditions and new problems brings with it the need for new solutions, methods, and measures. We cannot leave the ground by running or jumping: we need wings for that. Modifications are not sufficient. The transformation must be total. For this reason, we do not understand the painters who declare themselves interested in new problems, but at the same time still stand before a canvas, with the aim of filling it with forms and colours of more or less good taste. (…) Why should we not finally liberate these surfaces? Why don’t we finally understand that art history is not a history of the painter, but the history of discovery and the one who renews?” (quote from: Gualdoni, Flaminio, in: Dadamaino, Leonberg, p.7).

These ideas, which were radical for the times, were taken to heart by Eduarda Emilia Maino, known as Dadamaino, who in her first series of works, “Volumi”, cut round or oval forms in the canvas. The influence of Fontana’s “Buchi” (holes) cannot be denied, as she herself said: “I always hated matter and sought immateriality. Of course, Fontana played a decisive role in the history of my painting ... if Fontana had not pierced the canvas, probably I would not have dared to do so either. It totally removed matter to the point of making visible parts of the canvas, to remove any material element, to deprive it of any such rhetoric and return to tabula rasa, in purity.” These works were shown in the same year at her first exhibition at Galleria dei Bossi in Milan. Shortly afterwards she joined Manzoni’s Galerie Azmuth, which was ideally linked to artists in Europe thinking along similar lines: the Zero-Group in Germany with Otto Piene and Heinz Mack, the Nul Group in the Netherlands with Jan Schoonhoven, and the Motus Group in France. In 1961, she took part in an exhibition in the Netherlands, where her name was written wrongly by mistake, which led to her artist name of Dadameino. In 1962, she joined the group “Nouvelle Tendance”, which included the artist Raphael Soto.

With the series “Oggetto Ottico Dinamico”, from which the present work comes, Dadamaino was turning increasingly towards Op-Art and to a certain extent Kinetic Art. She drew up meticulous specifications on size, shaping, the relationship between the filled and empty parts of a work, and the arrangement of the plates. “The sides of the composite squares create a spherical impression, which produces a flowing dynamic. The particular arrangement of the shaping on the plates cancels out entirely, or only in a section, the overall view of the work, with a series of unstable elements, which change, depending on the position of the viewer in relation to the work. Although the object is static, it arouses an impression of continuous movement and variation.” (quote from, ibid, p. 8)