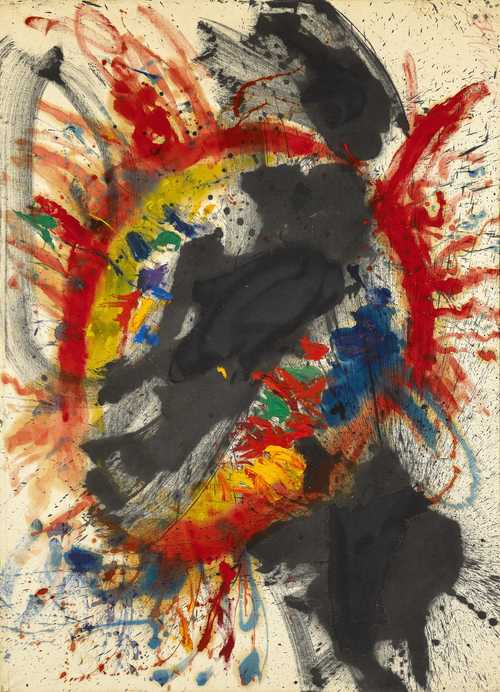 (Shanghai 1929 - New York 2010)
Raining in Rainbow. 1960.
Oil on canvas.
Signed and dated upper right: Ting 60, also titled on the reverse: Raining in Rainbow.
187 x 140 cm.
Provenance:
- Directly acquired from the artist.
- By descent to the present owner, since then private collection Switzerland.

The early work of the Chinese-American artist Walasse Ting, of which “Raining in Rainbow” is an example, very rarely appears on the art market. His figurative works produced from 1970 tend to predominate. It is his early abstract work, however, which impresses with its strength, variety and expressiveness.

This rare development from abstraction to figuration can be explained in part by his lively life story. Walasse Ting was born in 1929 in Wuxi. He grew up in Shanghai, where he attended the art academy for a short time and earned money as a street painter. He acquired most of his artistic skill on his own, however. In 1946, he moved to Hong Kong, where he stayed for a few years and his reputation as an artist grew. Just three years later he decided to go to Europe: he ended up in Paris in 1952 and came to know Western art for the first time. Being in Paris in the 1950s, he both had access to more or less the entire canon of Western art, and found himself at the centre of the avantgarde of the time. Through Pierre Alechinsky, Ting came into close contact with the CoBrA Group, who, with their expressive, gestural works, had a great influence on the young artist. By the end of the 1950s, the centre of Western art had relocated from Paris to New York, where Walasse Ting also moved in 1958. Here too he quickly came into contact with the avantgarde; he met Sam Francis, who facilitated his access to Abstract Expressionism. By the end of the 1960s, Pop Art was becoming increasingly important and probably played a great role in his development towards figurative art. Walasse Ting received American citizenship and moved between New York and Amsterdam. He took part in countless exhibitions around the world and in 1970 received the Guggenheim Fellowship Award. A serious brain haemorrhage in 2002 brought his artistic work to an end, and he moved definitively to New York where he died in 2010.

The present work was produced in 1960 when Walasse Ting had already turned his back on Europe and had gained a foothold in New York. In this work, we clearly see the transition phase, in which well-established old influences encounter the new. The broad, dynamic brush strokes which we recognise from the CoBrA Group, dominate the composition, but are supplemented with fine drippings on the edges, which lend the composition more depth and spontaneity. To have the possibility and artistic skill to use such diverse influences, which have nothing to do with one’s own cultural circle, and to translate that into a personal style, is rarely seen. What is even rarer, is that it is achieved so convincingly, as did Walasse Ting in the present work.

Sold for CHF 96 500 (including buyer’s premium)
All information is subject to change.