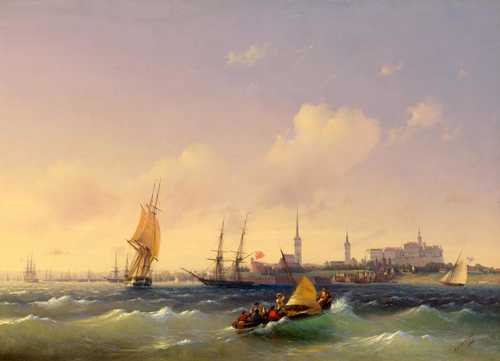 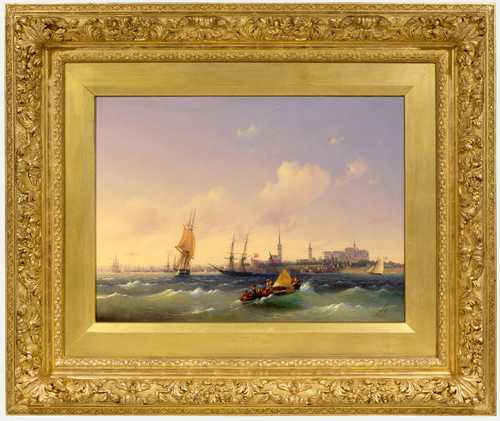 This view of Reval (today known as Talinn, the capital of Estonia) as seen from the sea is an outstanding work by the Russian landscape painter Ivan Konstantinovich Aivazovsky, which has only now come to auction after being conserved for many years in a private collection. The work dates from the middle phase of the artist’s career, a period when Aivasovsky had already achieved international recognition. He counted among his illustrious clients Czar Nicholas I (1796-1855) and Pope Gregory XVI (1765-1846), and had been invited to membership in several European academies. This highly successful phase of his career was to last for more than half a century.

Fascinated by the natural scenery of the Baltic Sea, Aivazovsky frequently travelled there and painted numerous landscapes of the region, including the present view. Reval was founded on the southern coast of the Gulf of Finland in the 10th century. The first mention of it is in the chronicle of the Arabic geographer al-Idrisi (1100-1166), under the name Kolôvan. The town was given the name Reval years later, following the defeat of the Danes and its subsequent passage under Hanseatic rule. From 1721 until February 1918, the city was part of the Russian Empire.

The work offered here is a version of a painting that Aivazovsky had completed one year earlier, which was directly acquired by Czar Nicholas I. Today in the Central Naval Museum in St. Petersburg (see Caffiero, G. and Samarine, I.: Seas, Cities and Dreams, the Paintings of Ivan Aivazovsky, Alexandria Press, London, 2000, plate 143), this painting is almost twice the size of the present work and is part of a series of six views that Aivasovsky completed in his role as official painter of the Imperial Navy. This position was created in honour of the artist, and even allowed him to wear an official navy uniform. The other five paintings from the series are also views of the Baltic region, including Kronstadt, the mouth of the Neva River with a view of St. Petersburg, the Peterhof fountains and the Suomenlinna and Gangut (Hanko) fortresses.

Although the view of Reval in the present auction owes much to the earlier composition, offering a very similar viewpoint, it also diverges from the larger work in several significant ways. The sea, animated by squalls, causes the small rowboat in the foreground to rock unsteadily, and the boats and ships in the background are positioned quite differently. The sky, bathed in violet and pink hues, provides a contrast to the rough sea with its pounding waves, and leads the viewer to the far horizon, where the city walls of Reval can be seen.
The stylistic influence of Romanticism, which Aivazovsky acquired from landscape painting classes in the Imperial Academy under Maxim Vorobiev (1787-1855), is clearly evident in the present painting, particularly in the lightness of the brushstrokes and the artist’s love of detail. Vorobiev was one of the leading exponents of Romanticism of his time, a movement that was gradually taking over from the then-dominant Neoclassicism.

In spite of Aivazovsky’s prolific production, most of his earlier works are now in museums, leaving relatively few still in private hands. It is therefore with particular pleasure that we are able to offer such a rare, high-quality and well-conserved work from this period.