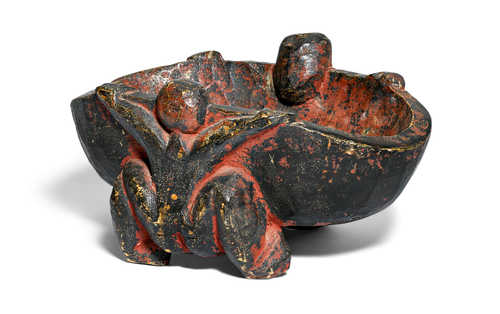 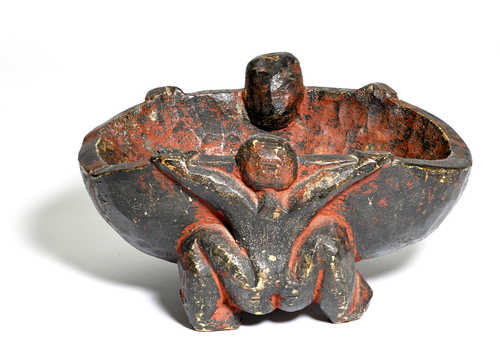 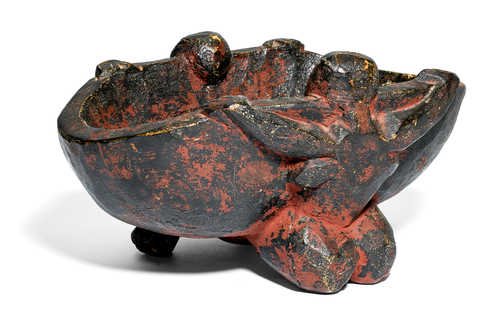 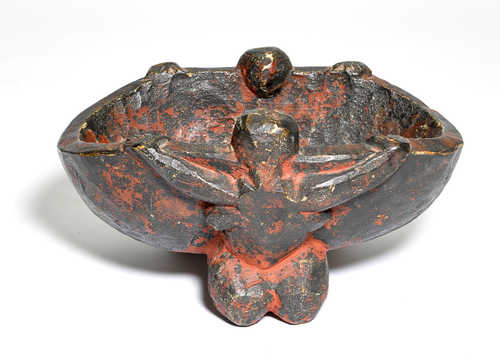 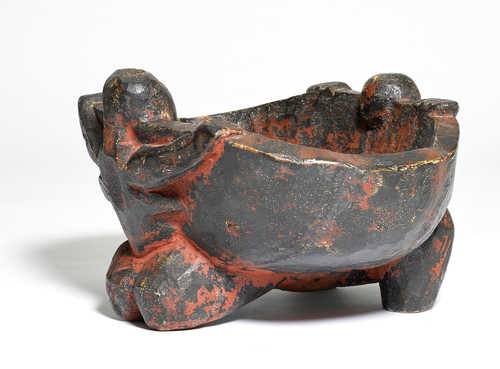 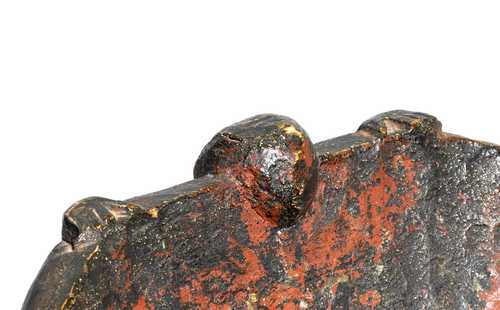 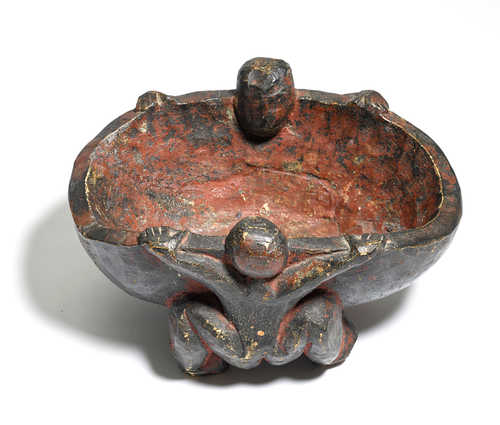 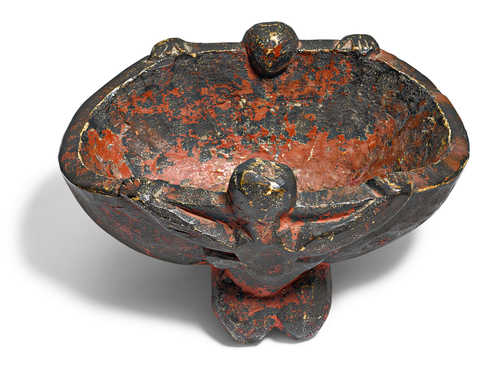 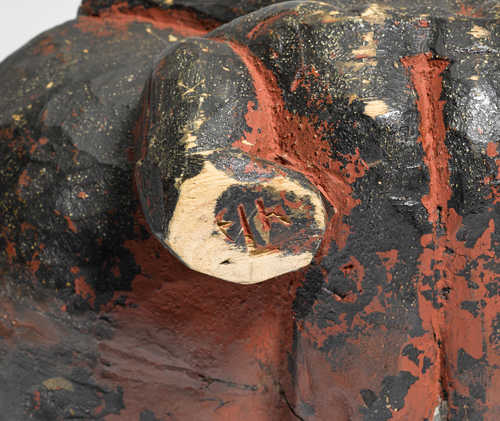 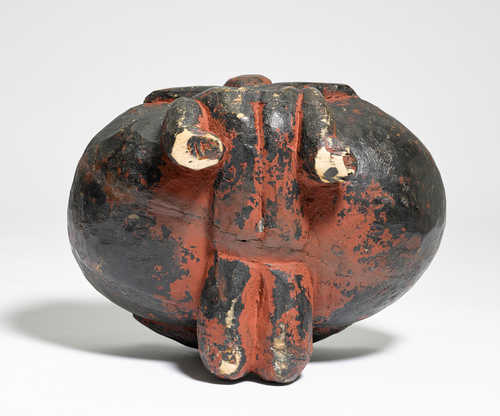 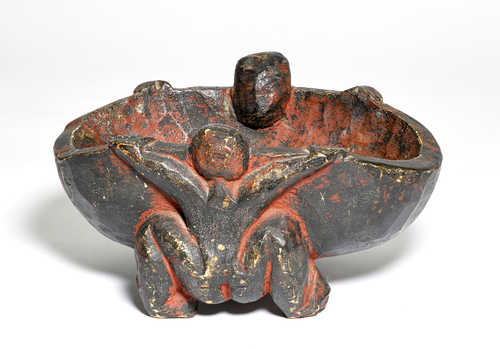 In addition to his numerous paintings and prints, Ernst Ludwig Kirchner also devoted himself intensively to sculptural work. Together with Barlach and Lehmbruck, he is one of the most important Expressionist sculptors. Sculpture played a central role within the Die Brücke movement, and it was Erich Heckel who first embraced the medium. Then, from 1909 onwards, Kirchner engaged with the art form most intensively of all the members until his death.

The motivation that brought Kirchner to sculpture was the need for utilitarian objects and household furnishings, and consequently caryatids can be found serving as bookends or shelving supports amongst the first sculptures made by Kirchner and Heckel. A common interest of the Die Brücke artists was the fusion of art and environment and the desire to put an individual artistic stamp on daily life. During his lifetime, Kirchner created masterpieces such as bowls, sculptures, chests, chairs, table legs, beds and many other unique pieces which he used to decorate his house and which for him – unlike his paintings – were part of his everyday furniture.
Kirchner placed great importance on his sculptures, making no distinction between purely sculptural works and utilitarian objects. These were often merged in any case for the artist. His first sculptures were formed of clay, limestone and sandstone. However, his favourite medium soon became wood, a material with which he was already familiar through woodcutting. The artist was fascinated by its unique creative properties: "how different is [...] a sculpture that the artist himself makes out of the real material with his own hands, where each curve and depression is formed by the sensuality of the creator's hand, where the sharp cut and the most tender carving directly express the artist's feeling" (Kirchner in: Über die Plastik von E. L. Kirchner, in: der Cicerone, vol. 17, 1925, p. 696).

Kirchner's sculptural work likewise influenced his painting and helped him in the execution thereof. Thus wrote the artist statements such as: "making figures is so good for painting and drawing, it gives the drawing a closeness, and it is a sensual pleasure when stroke-by-stroke the figure grows out of the trunk", and "this collaboration with sculpture becomes ever more valuable to me, it facilitates the translation of the spatial idea onto the surface (of the picture)" (1911 to Gustav Schiefler). His sculptures repeatedly turn up in his paintings, as is also the case for the present work, "Obstschale II", which was depicted by Kirchner in the painting "Stillleben mit Plastiken und Blumen" (Ill. 1) from 1912.
A recurring theme in Kirchner's sculptural practice is the human figure. Similarly, his carvings for utilitarian objects and furniture always take on human forms. Recalling Gauguin's magical South Seas worlds, Kirchner and his Brücke colleagues were inspired by the ethnological exhibitions at the Berlin Zoo, as well as by the large and diverse collections of the Dresden and Berlin ethnological museums. "He (Kirchner) found in the African sculpture in the ethnological museum, and in the South Seas beam carvings, a parallel to his own work" (Brücke Chronik 1913). Indeed, the figures in Kirchner's wonderful carvings are always closely linked to the figures of distant peoples and show their primal influence.

Crouching nudes mainly dominate his early sculptures of 1910. The work presented here also shows this depiction of two crouching nudes, presumably a male and a female, holding a bowl. The sculpture was (partially) painted with red paint, which Kirchner often executed himself for his important sculptures in order to, as he said, enrich the wooden sculpture with paint.
During his career, Kirchner carved approximately 140 sculptures, of which nearly half can still be found today, the remainder having been destroyed or lost. We are able to offer one of these very rare and unique pieces in this auction. "Obstschale II" is additionally accompanied by a very good provenance, having remained in Kirchner's possession from its production until his death, afterwards transferring to Kirchner's life partner, Erna Schilling. Circa 1943, Lise Gujer acquired the bowl for her collection directly from Erna Schilling. The family of the present owners, who were friends with Lise Gujer, inherited the masterpiece upon her death. The bowl has remained in the family collection since then.

Few sculptures by Kirchner have hitherto been offered at auction. "Obstschale II" brings a Kirchner object of this form to the market for the first time ever. It combines utility and sculpture into one and is unique in its execution and art historical context.