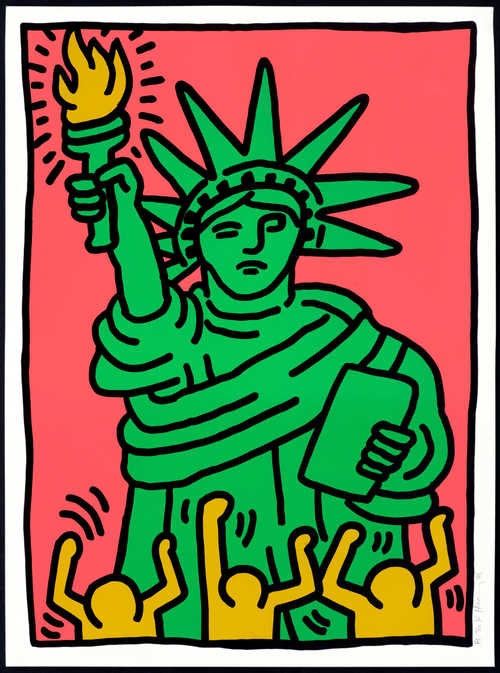 Keith Haring was born in Reading, Pennsylvania in 1958 and learned to draw at an early age. Through his father, an engineer and amateur caricaturist, he soon discovered a fondness for cartoons. He quickly cut short his studies at the Ivy School of Professional Art in Pittsburgh, as he did not want to pursue a career as a commercial graphic artist. By then certain that he wanted to devote himself entirely to his art, he moved to New York in 1978 and enrolled at the School for Visual Arts. In New York Haring encountered a flourishing art scene, and through his studies he became familiar with the works of Andy Warhol, Jean Dubuffet, Stuart David, Kenny Scharf, Jackson Pollock, Paul Klee, Mark Tobey and others. Although in his studies he experimented with performance art, video and other media, drawing remained his primary medium. In the early 1980s he used the blackboards in the subway in order to draw ceaselessly. These “Subway drawings” helped him to process his thoughts and ideas. In 1981 Haring exhibited on his own for the first time at the Wesbeth Painters Space and in 1982 there was a solo show at the Tony Shafrazi Gallery in New York. At the same time, he took part in Documenta 7 in Kassel, the Sao Paulo Biennale and the Whitney Biennale.

The highest recognition value goes to the pictograms, with which Haring’s oeuvre is associated, and which he filled with his typical style. With the use only of the line, he developed and imagined everything from the individual details of the figures to the large narrative cycles. His figures, rendered in a lively and striking range of colours, appear if anything humorous, cute and smart and are reduced to a pithy essential gesture.

His artistic messages were above all the testimony of a generation that symbolised for many the America of the 1980s. For with the simplest pictorial motifs Keith Haring reacted and confronted his epoch directly and reflected it: in the motif of the figure surrounded with rays (Lot 3679 or Lot 3682), the dog with rays, the UFOs, cultural symbols of the USA, as well the many drawings in which he centred on the theme of his own sexuality and repeatedly seized on art as a life-giving power. Having been diagnosed with AIDS in 1988, in the following year he set up the Keith Haring Foundation, which gave financing and art material to AIDS Organisations as well as initiating programs for children. He also devoted himself to broadening his audience with exhibitions, publications and licensing of his paintings. He used many of his late works for AIDS awareness. His paintings campaigned against AIDS for UNICEF, against Apartheid in South Africa, against illiteracy and drug abuse. Time and again children were at the centre of his endeavours.
The conscious and targeted marketing of his art with merchandise which was sold in his Pop Shops first in New York and Tokyo, furthered the worldwide popularity and diffusion of his style. The oeuvre which Keith Haring left behind with his death at the age of just 31 is as extensive as it is diverse. It includes paintings, drawings, sculptures, murals and stage sets, painted objects and countless temporary works as well as T-shirt motifs and posters.

Sold for CHF 53 300 (including buyer’s premium)
All information is subject to change.