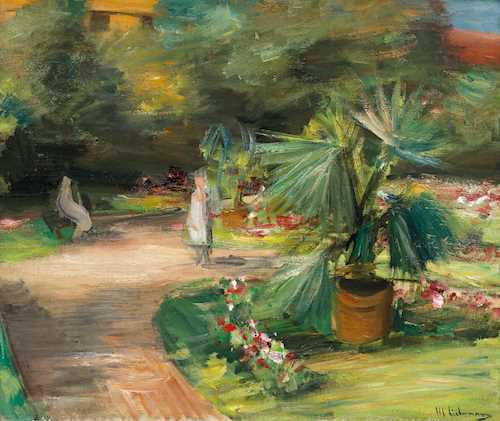 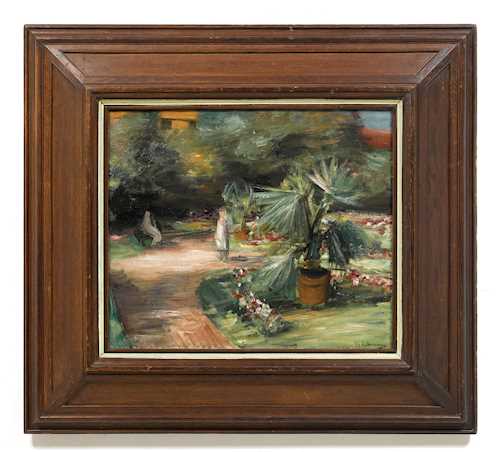 (1847 Berlin 1935)
Garten mit Palmenkübel und zwei weibliche Figuren. 1908.
Oil on canvas.
Signed lower right: M. Liebermann.
53 × 64 cm.
The authenticity of the work has been confirmed by Matthias Eberle, Max Liebermann Archive, Berlin, 21 March 2016. It will be included in the supplement to the catalogue raisonné under number 1908/36a.

Gardens were a source of infinite inspiration for Max Liebermann. “One could paint a hundred pictures here" he exclaimed when visiting a cottage garden with his friend Alfred Lichtwark, the director of the Hamburger Kunsthalle.

The present work, probably produced circa 1908, is one of Max Liebermann’s earliest garden views. Around the turn of the century, the painter let the strong social note of his works somewhat fade, increasingly devoting himself to portrait painting and other motifs such as sports scenes, bathers and riders on the beach. He first discovered the garden as a motif in his sixties, in the Dutch seaside resort of Noordwijk in 1908. There, many of the works were created on the beach, but also a few of a likely private garden.

In the following year, 1909, Liebermann acquired a piece of land by Lake Wannsee, and in 1910 he had Alfred Lichtwark create the garden of his new country house, the Wannsee Villa, which he called his "castle by the lake" and “little Versailles". About eight years later, during the war, this garden became the central theme of Liebermann's work.

He was interested in the relationship between humanity and nature. As with other motifs in his work, he was concerned with balance. One should attend to the weak and restrain the strong, to which nature also belongs. The garden requires understanding and careful maintenance, without which everything would overgrow and humanity would be contested for the space.

The present work is very similar to the first garden views created in Noordwijk and therefore could also have been produced in that context. The colours, garden planting and pathway direction are comparable. However, the reddish-brown building in the background does not quite match the Dutch seaside resort, wherefore Matthias Eberle considers it possible that this work was created in the South in the spring of 1909, when Liebermann spent several weeks in Italy. This could therefore also be a hotel garden in Florence or Rome.