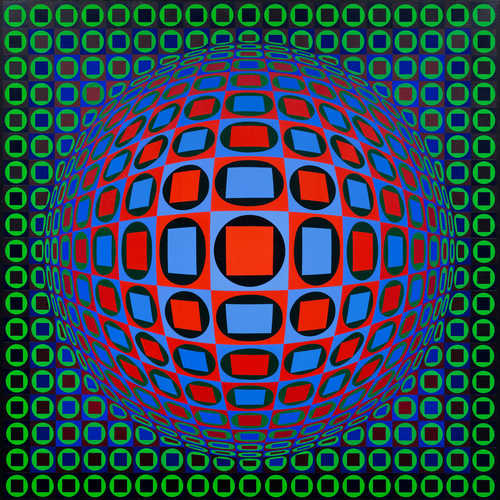 Provenance:
- Galerie Semiha Huber, Zurich (verso with the label).
- By descent to the present owner, since then private collection Switzerland.

“... The two creative expressions of man, art and science, meet again to form an imaginary construct that is in accord with our sensibility and contemporary knowledge.” Victor Vasarely

Before the Hungarian-born Victor Vasarely was to pursue his career in art, he studied medicine in Budapest. In 1927 he abandoned his studies and began a traditional painting course at the Podolni-Volkmann Art Academy, before he switched to the Mühely Academy in 1929. Here, while immersed in the Bauhaus-oriented training, he was able to pursue to the full his tendency to connect mathematical principles with artistic expression.

Initially, however, his reduced graphic style only met with a positive response in the advertising sector, for which he made numerous commissioned works, even after his move to Paris in 1930. The decade that followed finally brought him his due recognition as a fine artist, after his works were shown in the “Salon des Surindependants” (1945 & 1946), the “Salon de Realités Nouvelles” (1947) and the renowned Denise René Gallery (1944 & 1948).

He enjoyed this initial success with an abstract style, which in composition was somewhat reminiscent of Le Corbusier or Piet Mondrian. Looking back, however, this abstract phase was a decisive stage in the path towards nonfigurative form. It shows Vasarely’s route to be a plausible development, from reduction, to a complete renunciation of figural role models. Victor Vasarely’s essential trust in a pure formal arrangement of the pictorial surface was drawn not least from his profound understanding of geometric structures. On that basis he founded the movement which used optical illusions in its compositions, today known as “Op Art”.

One of the most distinctive forms from Vasarely’s Op Art oeuvre, is the round form rolling forwards, produced as a series and initially entitled “Vega” in 1968. 1968 was also the year when he increasingly integrated highly contrasting, saturated colours into his constructive patterns.

The work offered here at auction, “KEZDI-DOMB”, dates precisely from this key year and illustrates in exemplary fashion the compositional characteristics of this striking period of work: the round body which pushes out from the square pictorial space, is underpinned by a rich mesh of red, blue and green tones, which extend a net of square and round surfaces. Thus, the pattern of the individual colour surfaces reflects the kinetic tension between the rectangular canvas and the illusion of the round form. A kind of cross-reference is created between the micro- and macrocosm.

“KEZDI-DOMB” stands for a reflection on the form within its own structure: it is an independent work of art and the expression of a conceptual position at the same time.

Victor Vasarely’s works were shown at the Documenta exhibitions from 1955 to 1968, and today are represented in the most important collections, such as the Städel in Frankfurt and the Pinakothek in Munich, as well as the Metropolitan Museum of Art, the Guggenheim and the LACMA, to name but a few.

Sold for CHF 198 500 (including buyer’s premium)
All information is subject to change.