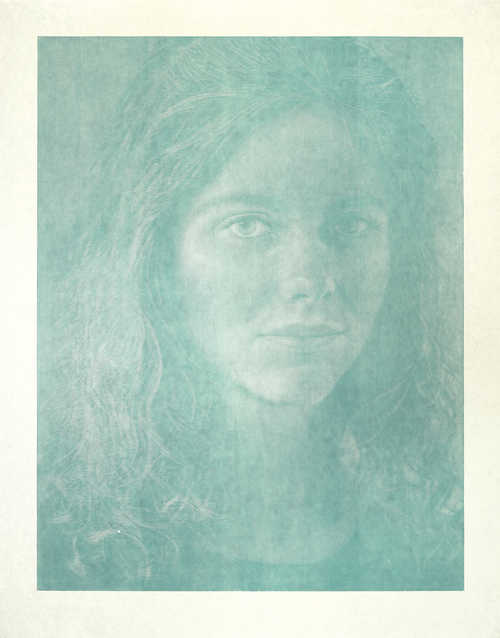 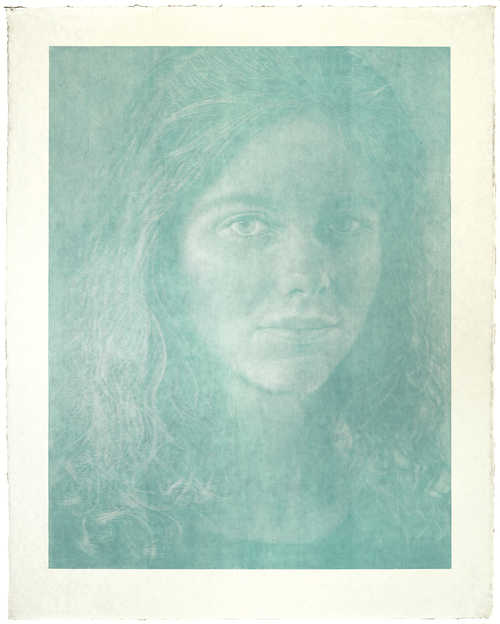 (Mörigen 1930 - lives and works in Rüschegg)
Dominique. 1988.
Woodcut in colour. 7/18. Signed in pencil on the reverse: Franz Gertsch. Image 234 x 181 cm on Japan paper by Heizoburo 275 x 219 cm. Published by the artist and Turske & Turske, Zurich. Printed by the artist and Nik Hausmann.
Provenance:
- Artist's studio.
- Purchased directly from the artist by the present owner, since then private collection Southern Germany.

"Dominique is of great importance to me, because here the concept of the portrait as landscape, the pure idea of the woodcut, and its rooting in a monochrome colour space come together for the first time" Franz Gertsch

With his monumental woodcuts, the Swiss artist Franz Gertsch is one of the most important and influential graphic artists of the second half of the 20th century. "The intention with the woodcuts was from the beginning to fulfil an old dream – that of a realistic monochrome picture" (quote Franz Gertsch, in: Exh. Cat.: Franz Gertsch. Franz Gertsch. Holzschnitte und Malerei auf Papier Kunstmuseum Bern, September – November 1994, p. 56.). In 1986 he decided to devote himself exclusively to the woodcut. At the same time, he did not wish to eschew the large format, which he was accustomed to using in his paintings, and therefore faced the challenge of first adapting the technical process of the woodcut to this format.

He primes his grained block, places it vertically and starts to puncture it with different hollow rods. As he himself says, he thus draws out the light surfaces; then later the shadow surfaces are printed. Depending on the arrangement and intensity of the cut points and strokes, he creates different degrees and intensity of light; “he builds up a system of drawing through contrasts of light and dark” (quote. Helmut Fiedel, in: Mason, Rainer Michael: Franz Gertsch. Holzschnitte, Munich 1991, p. 115). The priming helps the artist to check the cut work more easily. In addition, the repeatedly projected photograph, which serves as basis for the composition, is an aid to orientation and serves as a control during the creative process, since Gertsch does not make proof prints while he is cutting the block. Only when the entire woodcut is ready does the printing process begin. For this to happen, the prepared printing block is placed horizontally, covered evenly with pigment widthways, protected with supporting boards around the block, and then the paper to be printed is rolled out. Using a strong convex lens (instead of a folding tool) the rubbing begins, for which usually four people are required, and who change their position regularly in order to ensure that the paper is rubbed evenly. Each print is done by hand. While it can take up to half a year to prepare a printing block, the well-rehearsed team can take around a day to print one large sheet. The paper is custom-made handmade paper, which Gertsch sources from Iwano Heizoburo in Japan; the colour pigments used also come from Japan. Each motif is printed in different pigments, which are carefully selected by the artist and with their sequences of colour and luminosity establish the basis of a pictorial idea.
In both the paintings as well as the woodcuts Gertsch devotes himself exclusively to the traditional motifs of portrait and landscape, in that even the portraits contain a concept of landscape. When he decided to make only woodcuts, he first devoted himself to portraits. While in “Natascha” he experimented with different blocks and also different colours, and the motif is not reversed on the block, in “Dominique” he cut the block so that so that the image would be reversed (as it typical in woodcuts) and limited himself to one block.

Franz Gertsch has a clear scheme in his portraits: they are always frontal head and shoulders portraits of women. They are striking for their incredible detail and monumental scale. “As we see from up close, Gertsch has developed a structure made from millimetre-sized strokes, which exist in a dense sequence on the homogenous surface. Seen in detail, a clear relationship emerges between the juxtaposed light and dark surfaces. From a distance, on the other hand, and the size of his woodcuts inevitably calls for this, the individual points of light are condensed into a luminosity, which in contrast to the coloured, darker parts are seen as illuminations of the object.” (quote. Helmut Friedel, in: ibid. p. 115).
In addition to the way the light is directed, the expression of the sitter represents a challenge, as Gertsch himself explains: “As soon as you photograph a girl, or a young woman, she wants to portray herself, use her charm somehow. It is the task of photography to disrupt that. They just have to be, just look. My ambition is to depict the essence of things.” (quote Franz Gertsch, ibid p. 32)