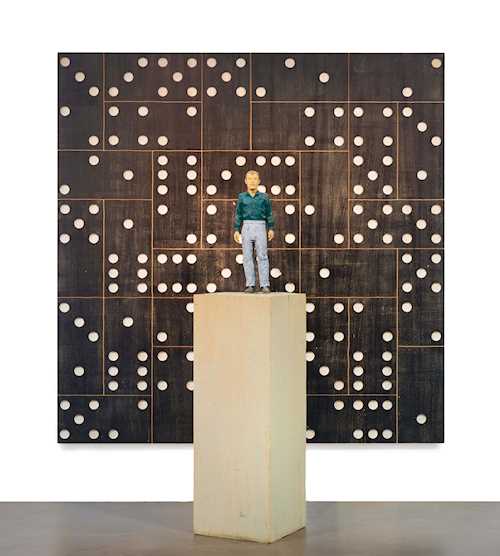 The sculptor Stephan Balkenhol was born in 1957 in Fritzlar in Hesse, the fourth son of a grammar-school teacher and a housewife. He grew up in Luxemburg, Kassel and Fritzlar. In 1972 the 15-year-old Balkenhol visited documenta 5 in Kassel and, at the pavilion curated by Jean-Christophe Ammann, he became acquainted with contemporary “realist” art. The artworks by artists such as Richard Artschwager, Jasper Johns, Chuck Close, Duane Hanson, as well as Franz Gertsch and Gerhard Richter, which he saw then for the first time, influenced his understanding of art and led to his decision to become an artist himself. After completing his Abitur (secondary school diploma) in 1976, he began his studies under Ulrich Rückriem at the school of fine arts in Hamburg, which he completed successfully in 1982. In his collaborative work and as assistant to the minimalist Rückriem, on the one hand the open discussion afforded the young artist the possibility of scrutinizing his own figurative pictorial language and of finding new ways of thinking, and on the other hand his desire to become a sculptor became apparent. In 1983 he was awarded the Karl-Schmidt-Rottluff scholarship, and in 1986 Balkenhol received a working scholarship from the Free and Hanseatic City of Hamburg. Alongside his work as a sculptor, soon after his studies Balkenhol also dedicated himself to teaching. From 1988-89 he took on a teaching appointment at the school of art in Hamburg, and in 1990/91 at the renowned Städelschule in Frankfurt. His teaching appointment at the Academy of Fine Arts in Karlsruhe in 1991/92 finally led to him being given a professorship in 1992.

Stephan Balkenhol is one of the most important sculptors within contemporary art. Although he also works in other media, it is his wooden sculptures which characterise his oeuvre. In particular, through the numerous sculptures in public spaces and the artist’s unique visual language, the recognition value of his works is immense.

In the 1970s and 80s, Stephan Balkenhol enjoyed an exceptional standing with his sculptures. His attention is focussed on people and animals, his work is figurative, and is neither politically nor socially critical, nor accusatory nor dogmatic. He prefers to work in wood, as he sees himself as a sculptor, that is, he prefers to remove material in order to create a form, rather than to model. In addition, the effort of working with wood imposes a certain pace. Of course, with his colourful wooden sculptures he finds himself in the tradition of artists such as Ernst Ludwig Kirchner or Ernst Barlach, and yet Balkenhol has a quite different intention in his work.

He wants to create works which are as realistic as possible, and which are free from all burdens and expectations. In his works he creates an “Everyman” – he does not impose any qualities or characteristics on his “people”. He consciously leaves open the meaning and story behind his sculptures, in order to give viewers the possibility of working this out for themselves, - each viewer with their own result. His figures are never life-size, but always smaller or larger than life, whereby they dominate the space round them in a particular way. The unusual plinths too, both in shape and height, create unusual dimensions which challenge the viewer.

The present work brings together most effectively these characteristics of his oeuvre. A man dressed in grey-blue trousers and a green shirt stands on a tall plinth. The man stands with his back to a wall made of dominoes. The sculptor himself gives the viewer no indication of the meaning, and so the viewer begins to come up with stories as to what the man before the wall is all about. Of one thing we can be certain, however, which is that humour is always an important element with Stephan Balkenhol: “Not since Claes Oldenburg began to install his sculptures outdoors in the 1960s has a sculptor so successfully employed the deadpan humor to draw people to art”. (quote Neal Benezra in: Exh. Cat. Stephan Balkenhol. Sculptures and Drawings. Hirshhorn Museum and Sculpture Garden Smithsonian Institution Washington, Stuttgart 1995, p. 23).

The other works are drawings on wood, which are far rarer, but which impressively show his handling of the body. Without hesitation we recognise his typical visual language, regardless of whether it is in two or three dimensions.