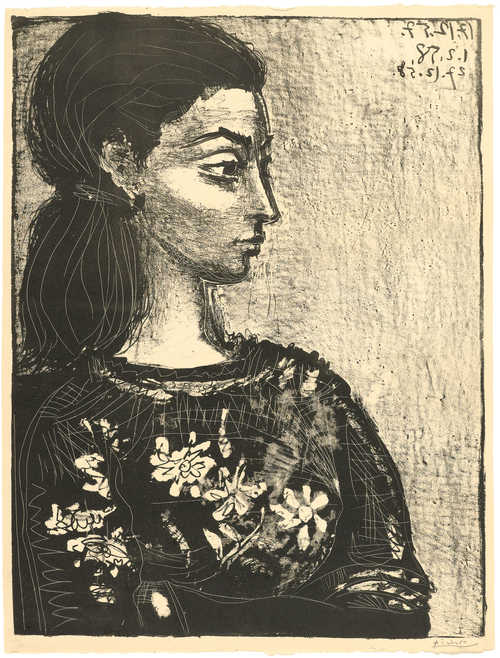 “A picture has to be transformed slowly and sometimes I simply cannot reach the point where I can provide it with the final thought that it needs”.

In the summer of 1952 Pablo Picasso met the 27-year-old Jacqueline Roque for the first time at a ceramics workshop at Madoura in Vallauris, where she was working as a sales assistant and where he had been making ceramics since 1946. From then onwards Jacqueline would become his main subject, as well as his last wife and muse.
He used her portrait as model for countless experiments, in both paintings and prints. The first works with Jacqueline come from the series "L’Artiste et son Modèle" from 1954. Later Picasso began several series of oil paintings and lithographs inspired by the “Femmes d’Alger” by Eugène Delacroix. In 1955 there were further portraits, including “Portrait de Femme à la robe verte” and “Femme assise près de la Fenêtre”, to name just a few. In the 20 years of their time together, from 1953 to 1973, Picasso created more than 400 portraits of Jacqueline so that there are more portraits of her than any other woman in his entire oeuvre.

Jacqueline Roque embodied for Picasso the perfect beauty of Spanish women, which he knew from childhood memories, with the mantilla, the veil which enveloped the head and neck as far as the shoulders. He painted her in diverse atmospheres and styles: cheerful or sad, sometimes classical, sometimes cubist, but certainly always with the recurring features of the elongated posture, the long neck, the high cheeks, the straight nose, the line which continues from nose to forehead and the large black almond-shaped eyes with the quick gaze.

The present print “Femme au corsage à fleurs” from 1957/58 is one of the most important and impressive works which Picasso created of his wife.

Fernand Mourlot, the printer who worked closely with Picasso and who had printed the artist’s complete lithographic oeuvre, reported that in this series it was especially important to the artist that he experimented in depth with the printing process, so that he could develop to perfection the beauty of his wife in the individual printing stages. (Mourlot, Fernand: Picasso, Lithographe. Edition du Live, Paris 1970, p. 244). His intensive examination of the pictorial motif of Jacqueline in profile wearing a floral shirt began as early as 17 December 1957 and was printed in an edition of 50 numbered exemplars. Here Picasso drew on a zinc plate using a brush to convey the shaded outline of the face and the eyes, as well as the dark hair tied back. The floral motif of the blouse was first drawn as silhouettes and these appear as complete only in the final state. On 1 February 1958 Picasso reworked the zinc plate but dispensed with all but a few proof prints in an edition. The final and definitive reworking, which is the sheet presented here, was produced on 27 December 1958. Here Picasso reworked the zinc plate with fine strokes, which strengthen the features and contrasts on the face, and lighten those of the blouse and the hair. This final version was also produced in an edition of 50.

This extraordinarily elaborate series of portraits and the final state seen here, show unequivocally Picasso’s outstanding ability and his unbelievable love of experimentation, when it comes to printing technique