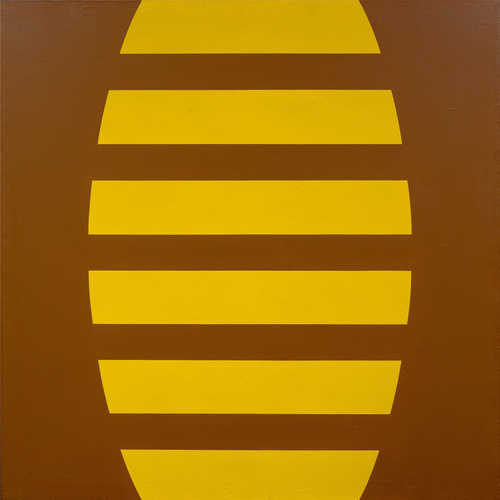 “As so common with so many of the great American artists of her generation, Marcia’s work found first in Europe.” (Fergus McCaffrey)

The American artist Marcia Hafif was born in Pomona, California in 1929. After completing her art studies on the Italian Renaissance and Far Eastern Art at Pomona College, she travelled to Italy in 1961, where she planned to study for a year. She decided, however, to remain in Rome and settled there for eight years. Already while studying art history she was becoming increasingly involved in painting.
In Italy she developed her unmistakable style, which she herself named “Pop Minimal”. In the tradition of American Hard Edge Paintings, she painted abstract, geometric compositions with monochrome colour surfaces. These works are very characteristic of her early Italian period. Her inspirations were often the colours of the billboards which stood along the Italian motorways. In this period, she was already exhibiting her works in galleries in Venice or Bari, or in Rome where she showed “New Paintings” in Galerie Editalia in 1969. Today her works which were produced between 1961 and 1969 are grouped under the series name “Italian Paintings”.
The present painting belongs to this Italian period. A stencil-like, flat, geometric form, with straight, almost hard edges, despite the round basic form. Then with a sharply delineated contrasting application of paint, two earthy tones, of brown-red and yellow-gold, radiate with a harmonious and saturated fullness.

She subsequently returned to California, where she completed a further degree at the University of California in 1969. From 1971 she found her new home in New York. From the 1970s Marcia Hafif dedicated herself to the pure force of colour. From then onwards her paintings would eschew form and composition and would represent colour exclusively as colour. For a description of her monochrome works, terms such as “radical paintings” or “table of pigments” are used. To produce these works, she applied her paints with a slightly blunt stroke, with minimal colour variations, which at the same time create a barely noticeable powdery surface. The monochrome surfaces appear to move very slightly. In this reduction she found the possibility of experimenting and investigating in depth the essential components of painting, such as material, surface and brush stroke.

Her works are shown in numerous museums such as MoMA in New York, Haus Konstruktiv in Zurich, and MAMCO in Geneva, as well as museums in France. A retrospective of her work was shown at Kunsthaus Basellland in Autumn 2017 as well as the Kunstmuseum St. Gallen, from September 2017 until January 2018. Marcia Hafif died in April of this year.