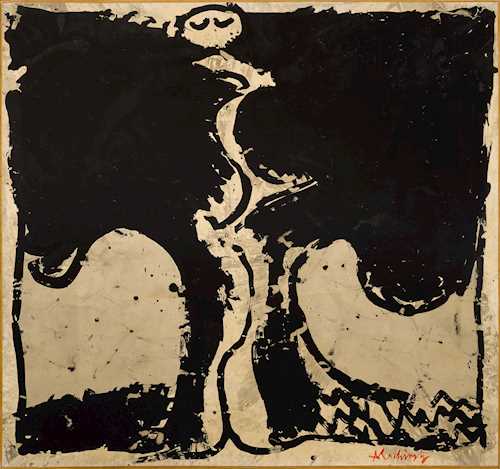 “I would never have paid so much attention to the composition of a work if I had had the sheer good luck of being right-handed! My difficulties with writing have made me very sensitive to ways of writing in general. I contemplate a picture very often as if I had a load of graphological information before me. In the painted lines you have to discover the hand; I ask myself, is the person behind it hesitant or determined, sensitive or obtuse, pretentious, moderate, engaging, precise, brutal, pitiable, refined, open, confused, confident? etc.” Pierre Alechinsky

Pierre Alechinsky was born in Brussels in 1927, the son of Russian-Jewish immigrants. At the age of 17 he began his studies in book illustration and typography at the School of Architecture and Applied Arts in Brussels. In 1945 he discovered the work of Michaux, Dubuffet and the Surrealists, who would influence him initially. In 1949 he made the acquaintance of the painter Christian Dotremon and joined the artist group CoBrA. The transnational avant-garde movement under the influence of Surrealism, developed an autonomous pictorial world and form of expressive figuration. Pierre Aleschinsky was very involved in the group and made a considerable contribution with the creation of the magazine CoBrA. The group, however, only lasted a few years and by 1953 it had already disbanded. As a result, Alechinsky moved to Paris. Through his interest in book illustration and calligraphy his affinity for paper developed further and it became his preferred pictorial support. In the 1950s, through his friendship with the Chinese-American poet and painter Walasse Ting, Alechinsky’s interest in East Asian painting and calligraphy was aroused, and he became very closely involved with this subject. After a trip to Japan in 1955 he changed his painting style. From predominantly abstract forms, he moved to a more representational and roughly painted figuration. These figures are influenced by Asian art, especially calligraphy. His work became lyrical, full of imagination and cultural notes, which clearly spanned both Western European and Asian cultures.

From the 1960s Pierre Alechinsky worked mostly on paper, producing editions as well as ink drawings. His paper was mostly used sheets of paper, such as old receipts for small formats, or historical maps or China paper for large formats. His consistent use of contrasting colours or simply black ink on a white background, as well as the expressionist, almost childish elaboration of his themes are reminiscent of the CoBrA style. With his sweeping brush strokes, he created extraordinary figures of a fantastic pictorial cosmos. The wealth of motifs seems endless, stocked with animals such as snakes, or mythical creatures, volcanic eruptions, trees, ships, fish and the sea. Without predetermining his subject, the picture would develop in the act of making. From the interplay of the physical action of the painter, spontaneous association and playful transformation of the motif, his works would emerge. The “Remarques Marginales” as they are called, are pictures in the margins, which are also a characteristic element in Alechinsky’s Oeuvre. Whether they are of considerable width, adorned like frescoes, or simply drawn with a thin stroke, in conjunction with the central part of the image they form a whole.
Only when the picture is completed does he finally laid down on the canvas

Pierre Alechinsky’s works have been exhibited internationally since the 1960s. He took part in two biennales in Venice and there were solo shows dedicated to his work in important institutions such as the Stedelijk Museum in Amsterdam and the Centre Pompidou in Paris. In 2007 an important retrospective was held at the Musées Royaux des Beaux-Arts de Belgique in Brussels. In addition, in 1983 Alechinsky was named professor of painting at the Ecole Nationale Supérieure des Beaux Arts in Paris and in 1994 he was awarded an honorary doctorate at the Free University of Brussels. He received numerous prizes and honours, including one recently in 2018: the “Praemium Imperiale” art prize, which he received at the age of 90.

Sold for CHF 44 220 (including buyer’s premium)
All information is subject to change.