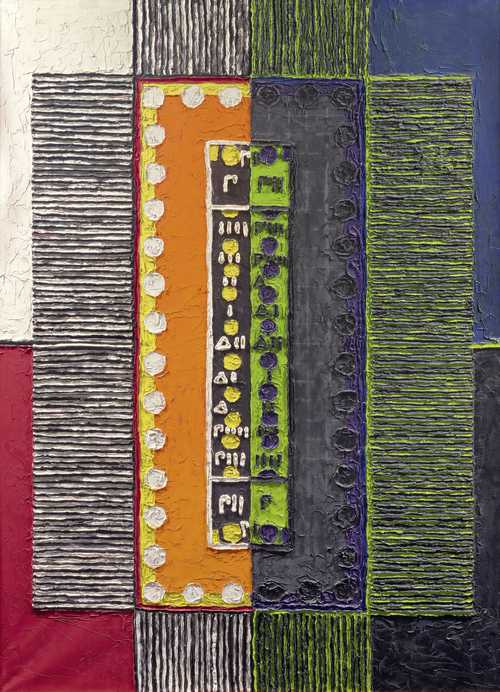 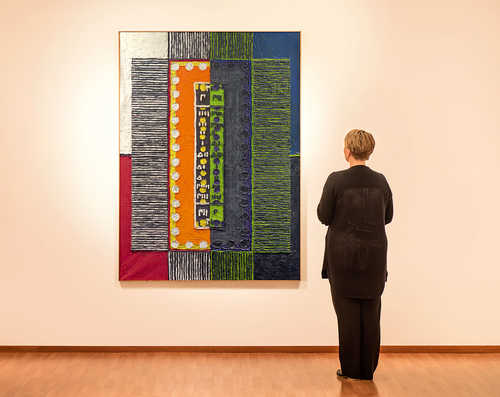 “From time to time the opportunity arises for a concise, subjective and categorical statement: Jensen is great. He is one of the best painters in the United States.” Donald Judd

Alfred Jensen is one of the most fascinating artists of the second half of the 20th century. His work, both in terms of concept as well as in his themes and motifs, is entirely singular and so unique in his influences, so that he cannot be associated with any artistic trend. He belongs to the generation of Abstract Expressionists, but interprets abstraction in a completely different way. Despite this special position, he is one of the most respected and influential artists of that generation.

Alfred Julio Jensen was born in Guatemala city in 1903, the son of a Dane and a German-Polish mother. His Mayan nanny was to have a big influence on him as a future painter: “I remembered at the time what my Mayan nanny had taught me: to think and act you are guided only by surfaces, colours and borders. In my search, I painted these notions, until I realised that there were other archaic rules, which corresponded to the Mayan concepts. I concluded from this that the exploration of all archaic systems could be of great value to me as an artist.” (Alfred Jensen) After the death of his mother, the 7 year old Alfred was sent with his siblings to live with an uncle in Denmark where he attended primary school. After finishing school, he got work on a ship and began to travel the world; firstly to Malaysia and Australia. After the death of his father in 1922, he bought a farm in Guatemala with his brother, which, however, did not do well. With the money from the sale of the farm, Jensen moved to San Diego, where he received a scholarship for the San Diego Fine Arts School. In 1926 he travelled to Munich, in order to study at the school of Hans Hofmann, whose teaching he quickly found restrictive, however, and preferred to copy Dürer and Brueghel in the Alte Pinakothek.

While away for the summer he met the art collector Saidie Adler May, who supported him in his studies. They first went to Paris, where Alfred Jensen began his studies at the Académie scandinave. In the coming years he and May travelled the world, Jensen advising her on how to build up her art collection, and in 1938 they finally settled in New York. The death of May in 1951 led Jensen, already at an advanced age, to dedicate himself exclusively to his art. He moved into his own studio and took part in an exhibition at the John Heller Gallery for the first time in 1953. Further group shows followed and he made the acquaintance of Mark Rothko and Sam Francis. In 1958 the then director of the Basel Kunstmuseum, Arnold Rüdlinger purchased the first of Jensen’s paintings for the Swiss collectors’ group “La Peau de l’Ours”: the present work arrived in Switzerland by the same route. Alfred Jensen was then increasingly invited to exhibit in Switzerland, and in 1962 he began a long and successful collaboration with Eberhard Kornfeld. Alongside numerous thematic group shows, he was invited to documenta 3 in 1964 and he participated on two further occasions. In 1977 he took part in the Biennial Exhibition: “Contemporary American Art at the Whitney Museum” and in the same year represented the USA at the XIV. Biennale in Sao Paulo. In 1978 the Albright-Knox Art Gallery organised a retrospective of his work which toured other museums. Alfred Julio Jensen died in 1981. In 1985 the Guggenheim Museum mounted a comprehensive retrospective of his work.

When Alfred Jensen took part in documenta V in 1972, Harald Szeemann coined the concept of the art of “individual mythology”. He sought thereby to categorise artists such as Jensen, but also Strübin and Herbin, who could not be assigned to a stylistic trend, and were characterised by their individuality. He found, in the case of the American artist, an extremely fitting description. His childhood in Guatemala had awoken Jensen’s fascination with the culture of the Mayans, and stimulated an interest in other early cultures. In examining the cultures of the Greeks, Romans, Egyptians and Chinese he discovered more and more commonalities which he harnessed. He researched different systems of organisation such as the “the Mayan and Incan calendars, the structural designs of the Mexican and Egyptian pyramids, the Indian and Chinese numbering systems, writings, symbols and hieroglyphs, the rule of Golden Section, the theorem of Pythagoras, the Pythagorean and Orphic teachings, the signs and houses of zodiac and old world maps, the Delphic Oracle and the prophecies of I Ching, Leonardo da Vinci’s writings and Goethe’s theory of colours” (quote Wieland Schmied, in: Exh. Cat. Alfred Jensen, Kestner-Gesellschaft Hannover, Hannover 1973, p. 22), drew from these the essential elements, and used them in his work. Of these he made his own interpretations and altered the systems according to his own uses. Therefore, it is often not necessary for the viewer to understand the systems underlying the work, but they must recognise that they exist and that they are part of the pictorial composition. Jensen himself said: “My artistic expression is a personal experience. It is in fact too personal to put into words. In the long run it is the poetry of the image, the inner vision, which must captivate the viewer.”

His paintings are therefore the result of careful research and planning. Even if we don’t need to understand the mythological substructure, we do still recognise two dominant systems. In the colour order he is guided by Goethe’s Theory of Colours, with which he became acquainted through Auguste Herbin. “So he adopted the idea put forward by Goethe, as opposed to Newton, that colours arise from the interaction of the two poles of white and black, light and dark, which Goethe had deduced from his observation of the coloured edge around the white and black when seen through a prism. He singled out yellow and blue as the colours which were closest to the two poles and could be intensified towards the colour red … Jensen also regarded colours as discrete units and not as a composite. In Goethe’s sense, he interpreted the principle of duality of white and black metaphorically, by transferring it to other opposing pairs, such as male and female, active and passive, plus and minus and so forth …” (quote Dieter Schwarz, in: Exh. Cat. Alfred Jensen. Werke auf Schweizer Sammlungen, Winterthur 2015, p. 22)
The second system is the chess-board-like structure, which never leads to a final division. Instead, he uses the grid lines, plays with them and creates relationships, between the grid lines themselves, and between the colours and the grid.

In the present work we no longer see the grid lines as such, but the fact that the composition is subject to a strong ordering principle, quickly becomes obvious. The influence of the temple complex at Paestum has already been introduced through the title. If we compare Jensen’s painting with the floor plan of the second temple of Hera, we find the identical structure, except for a small deviation. The impastoed and painstaking application of paint lends the work depth and at the same time makes the system of organisation immediately tangible for the viewer. The use of colour initially obscures the sense of order, but as soon as one begins to recognise the relationship between the colours, the ancient temple structure opens up. “Temple of Numbers at Paestum” is furthermore an outstanding example of Jensen’s concept of space. As Donald Judd notes, Jensen’s works are “completely flat, entirely pattern. Jensen’s paintings are not radical inventions, but this aspect of his work is. There are no other paintings which are so entirely without space … Jensen for his part relies entirely on the power and complexity of pattern. The work is direct, luxuriant and strident.” (quote. Donald Judd, ibid. p. 28)

Mark Rothko also visited Paestum and, as he himself said, painted the temples in his works without knowing them. A comparison between the present work and a painting by Mark Rothko shows to great effect their common roots and at the same time their entirely opposite treatment of the same theme. Jensen’s unique position within 20th century art is clear once again.

Sold for CHF 70 000 (including buyer’s premium)
All information is subject to change.