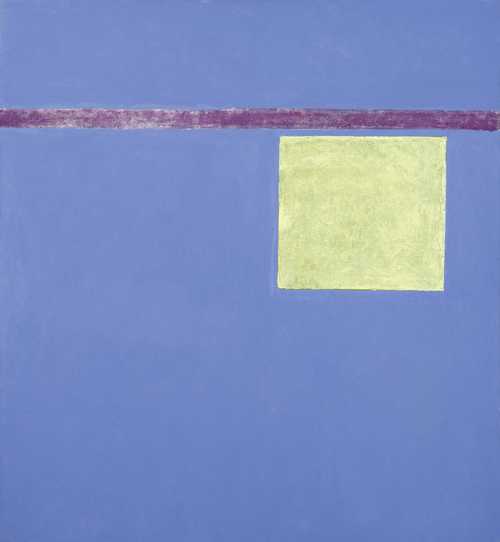 Theodoros Stamos was one of the most important Abstract Expressionists, who worked in series and embarked on an autonomous and very consistent path within the group. The unfortunate circumstances surrounding the death and estate of his friend Mark Rothko, meant that he, and by extension his work, have for a long time been shunned or have been forgotten.

Theodoros Stamos was born in New York in 1922, the son of a Greek immigrant. A bursary enabled him to attend the American Artist School, where he studied sculpture until 1939. Through his acquaintance with the artist group “The Ten” and his close examination of the works of Milton Avery and Marsden Hartley, shortly before his graduation he turned to painting and abandoned his previous studies. He found refuge in various studios and quickly made the acquaintance of artists such as Arshile Gorky, Adolph Gottlieb and Barnett Newman. In 1943 he had his first exhibition at the Wakefield Gallery, so that his works became known to a broad range of collectors, and he came into contact with Abstract Expressionism which was then slowly developing. From the mid-1940s he increasingly took on teaching assignments, for example at the progressive Black Mountain College. Around 1954 Stamos began to work predominantly in series, which were increasingly dominated by colour surfaces. Numerous journeys through the US and Europe expanded his horizons and brought new facets to his work.

As with other Abstract Expressionists, above all Jackson Pollock, Theodoros Stamos developed his comprehensive oeuvre starting with figurative motifs, which were undeniably influenced by Surrealism, but which also show a fascination for amorphous and mythological motifs.
“Moonflowers II” (Lot 3471) from 1949 is an outstanding example of this phase. We recognise the still figurative references, sense the influence of Surrealism and recognise at the same time the shift towards abstraction.

By the beginning of the 1950s the figurative aspect was slowly disappearing, and Stamos embarked on the path to abstraction, which he explored in diverse ways over different series. From the mid-1950s until 1961 three series dominated his oeuvre: “The Fields”, “High Snow – Low Sun” and “Channel”. Expressiveness underpinned by a dynamic brushwork characterise these series, and thus the “Sun-Boxes” appear almost as a caesura. “Hovering Yellow Sun-Box” is an outstanding work from this series. The sunlight is captured on the right edge of the square Sun-Box. Its counterpoint, which at the same time also secures the internal structure of the composition, is the purple stripe, which runs just above the box over the entire width of the work. Both the yellow Sun-Box and the purple stripe hover before a bright blue colour field. Stamos had thus committed himself entirely to colour. With the help of colour he could produce light in each and every variant in his pictures and create the corresponding atmosphere. At first glance, the works of the Sun-Box series exude an infinite calm through the fine, harmonious application of colour and the rigour of the composition. Small deviations in the geometry and the different layers of paint which shine through disturb this calm, however, and lend the work energy and depth.

With the “Infinity series” Stamos turned again to the use of free forms, but retained the harmonious, thin application of colour. The present work from 1976 (Lot 3473) is rendered in brown-beige earth tones; only the dark red stroke breaks out from the colour canon. Bound by two brown lines and the red stroke, a bright rectangle floats in the left half of the picture. Compared to the Sun-Boxes, the form is less severe. While the brown lines appear to confine the rectangle, the red stroke lends dynamism to the composition, and allows the rectangle to float a little more.