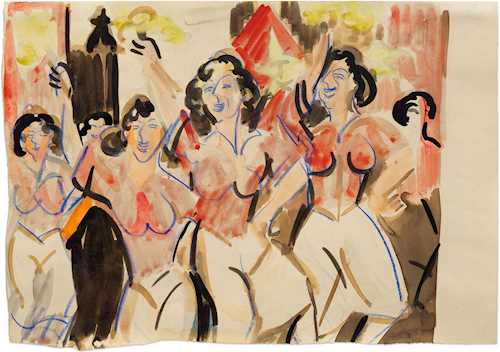 (Aschaffenburg 1880 - 1939 Davos)
Mary Wigman-Tanzgruppe. 1926.
Watercolour and blue chalk on paper.
On the reverse with the estate stamp and the inscription: Da/Be 25.
36.5 x 51 cm.
This work is documented in the Ernst Ludwig Kirchner Archiv in Wichtrach/Bern.

Mary Wigman was one of the most influential pioneers of rhythmic expressionist dance. In 1920 Wigmann opened a dance school for modern dance in Dresden, forming a group of talented dancers and scheduling their first performances a year later. Wigman herself was actively involved in the art scene, where she also met Ernst Ludwig Kirchner. Kirchner painted Wigman's dance group several times in the 1920s. In addition to many movement studies usually drawn in charcoal or pencil, the work presented here "Mary Wigman-Tanzgruppe" is an elaborated version executed in watercolour and coloured pencil. Kirchner had the privilege of accompanying and observing the group during rehearsals before the premiere. It is this involvement with Mary Wigman's dance group that eventually led to Kirchner's intense engagement with dance.