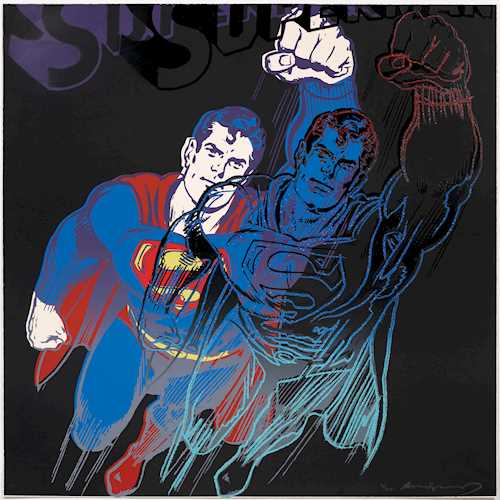 (Pittsburgh 1928–1987 New York)
Superman. 1981.
Colour screenprint with diamond dust. 8/200. Signed in pencil lower right: Andy Warhol. On the reverse with the stamp: © D.C. COMICS, INC. 1981. THIS INTERPREATATION CREATED BY ANDY WARHOL IS DERIVED FROM AN ORIGINAL VERSION OF SUPERMAN COPYRIGHTED BY D.C. COMICS. Sheet size 95.2 x 95.2 cm on Lenox Museum Board. Published by Ronald Feldman, New York (with the stamp on the reverse). Printed by Rupert Jason Smith, New York (with the blindstamp).
From the 10-part portfolio "Myths".
Provenance:
- Barrington Gallery of London.
- Purchased from the above by the present owner, since then private collection Germany.