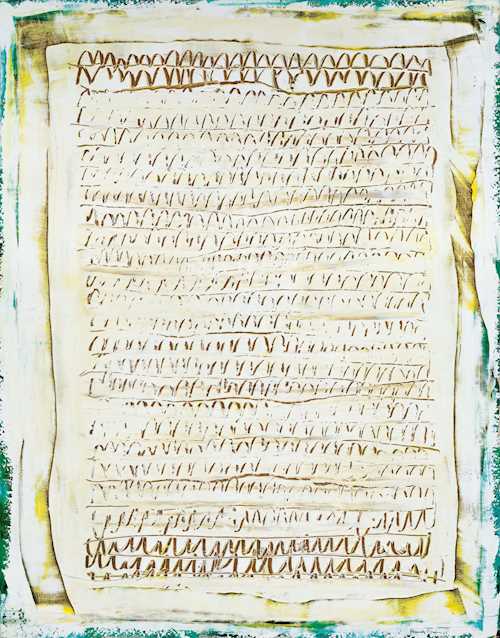 (1931 Barcelona 2005)
La Vinya. 2005.
Oil on canvas.
Signed, dated, titled and with information to technique and size on the reverse: Hernandez Pijuan 2005 "LA VINYA" 146 x 114 cm oli tela.
147 x 114 cm.
Provenance:
- Galerie Joan Prats, Barcelona (with the stamp on the stretcher).
- Galerie Lutz & Thalmann, Zurich (verso with the label).
- Purchased from the above by the present ownwer, since then private collection Switzerland.

Juan Hernández Pijuan was born in Barcelona in 1931. His career as an artist began at the Escuela Superior de Belles Artes de Sant Jordi, the Royal-Catalan Academy of Fine Arts, where he was also awarded a professorship in 1976. In 1989 there followed a Chair in Painting at the Facultad de Belles Arts (Faculty of Fine Arts) at the University of Barcelona. His creative work extends far beyond national boundaries. As an internationally recognised artist his works have been presented several times at the Venice Biennale. In addition, important collections around the world, such as those of the Metropolitan Museum of Modern Art in New York, as well as his involvement in key exhibitions, bear witness to his success. The culmination of Pijuan’s life’s work came when he was awarded the Premio Nacional de Arte Gráfico in 2005. Pijuan died in the same year at the age of 74.

The source of his inspiration is the landscape. The Catalan town of Folquer, where Pijuan built his summer residence in the 1970s, often comes to the fore. The geological structures, the colours of this region, as well as the play of light and shade in the course of the day, form the core of his creative activity. This cycle of nature, as addressed by the artist many times, is reflected in Pijuan’s works. Although the works show a certain degree of abstraction, Pijuan avoids classifying them as abstract art. Oil painting is one of his main areas of focus, as is drawing.

His earlier works were dominated by monochrome colour spaces, complemented by abstract elements, including dappling. Later works on the other hand moved away slightly from the abstract form and adopted figurative motifs. In these, the colours, as in the case of the present work "La vinya", are applied in several impastoed layers on the canvas. In the second stage the different layers of paint come to foreground when the surface is scored while still damp. This process can be seen repeatedly in Pijuan’s works. Thus, his works are characterised primarily by the resulting tension between the layers of paint and the incised lines within the pictorial space. Inspired by real landscape, Pijuan creates abstract art, which, while appearing minimalist, conceals a certain degree of complexity.

Sold for CHF 68 620 (including buyer’s premium)
All information is subject to change.