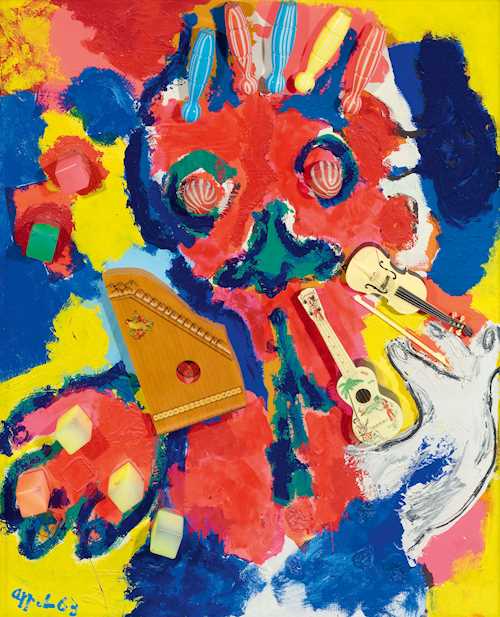 “I left home at eighteen. My father was sorry to see me go, because I was a good barber. Alone I entered the world of the German occupation. My principal worry during the war was to stay alive while others were starving. During the first war years I attended the Academy of Fine Arts. In order not to be taken off to Germany, I carried an identity card of the Academy. And they had a soup kitchen. Those years I led a hungry and poor existence; I had no money, and all my friends were dirt poor, too. Cold and hungry and yet working hard – very hard. Crowded Amsterdam became ever barer and poorer and empty, the neighbourhood one big misery. Although an epidemic was razing through the world, my beginnings as a painter were enthusiastic. The Academy was a good place to learn about classics, the Greeks, Romans, and Egypt” (Karel Appel. From: Frankenstein, Alfred. Karel Appel. 1980. p. 32)

Karel Appel, born in 1921 in Amsterdam, is considered the most prominent Dutch artist of the Post War period. With an explosion of mostly thickly applied paints, fanciful shapes and lines, he overcame the crises of two world wars and, having emerged from very simple circumstances, he managed to gain a position of international recognition.

At the age of 15 he painted his first landscape in the style of Claude Monet. As a young man, Karel Appel worked in his father’s hairdressing business until he left the family home against the will of his parents in order to pursue his desired career as an artist. In 1940 he began his studies at the Imperial Academy of Fine Arts in Amsterdam. Two years after graduating, in 1944 he had his first solo show in Groningen. He gained international recognition in 1953 with an exhibition in Brussels, followed just a year later with an exhibition in New York. In the 1950s he took part in the biennales of Venice and Sao Paolo where he received prizes on each occasion. In 1960 he received the Guggenheim International Award, and five years later the first retrospective dedicated to his work was held by the Stedelijk Museum in Amsterdam and toured throughout Europe.

During his studies Appel made the acquaintance of the painters Corneille and Constant, with whom he and other artists formed the “Experimentele Groep in Holland“. In 1948 he was a founder member of the international artist group CoBrA and was fully involved in every meeting and all group shows in Amsterdam, Brussels, Copenhagen and Paris. During this phase his work still showed the influence of Jean Dubuffet, Henri Matisse and Pablo Picasso. In 1950 Karel Appel moved to Paris, where the avant-garde currents of Art Brut, Art Autre and Surrealism proved an inspiring environment.

Even after CoBrA had disbanded, he stayed true to his expressive, spontaneous, colourful and sometimes ironic pictorial language. His expressive painting style was characterised by a seamless transition from figuration to abstraction. Strident groups of colours dominate the pictorial space. In the 1960s the figures became lost amongst the dynamic gestures, as in the present exemplary large format work “Don’t Bother” from 1963. Here the materiality of the paint occupies the foreground. The lines and surfaces converge to form an expressive colour mass. Somewhat later, from the 1970s, Appel’s style became more moderate, as seen in the painting from 1971 “Cochon avec Femme”. The lines of his completely imaginary, fantastic human figures or animal forms have become clearer.

Alongside painting, the artist also devoted himself to sculpture, printing and writing poetry.
Karel Appel died in 2006 in Zurich, where he had lived during his later years.