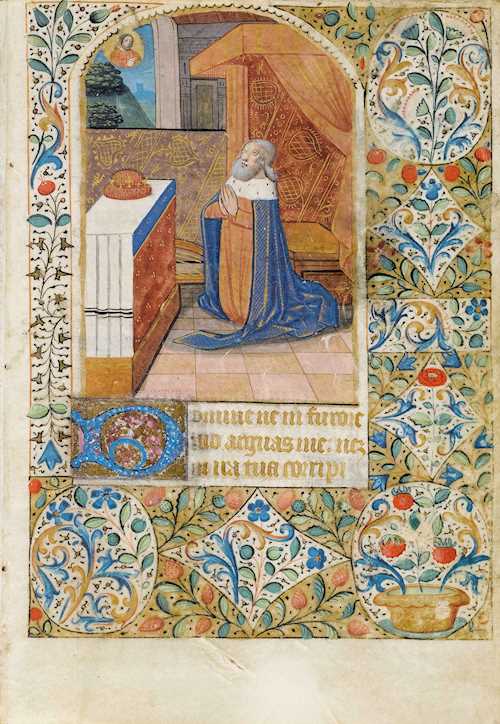 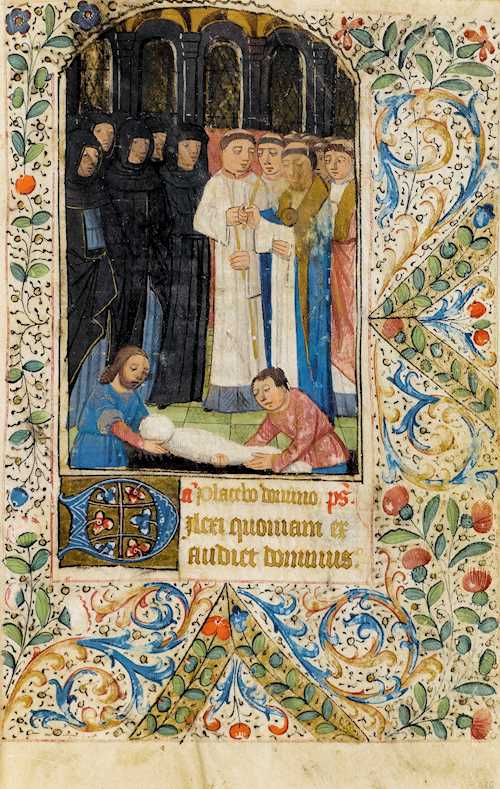 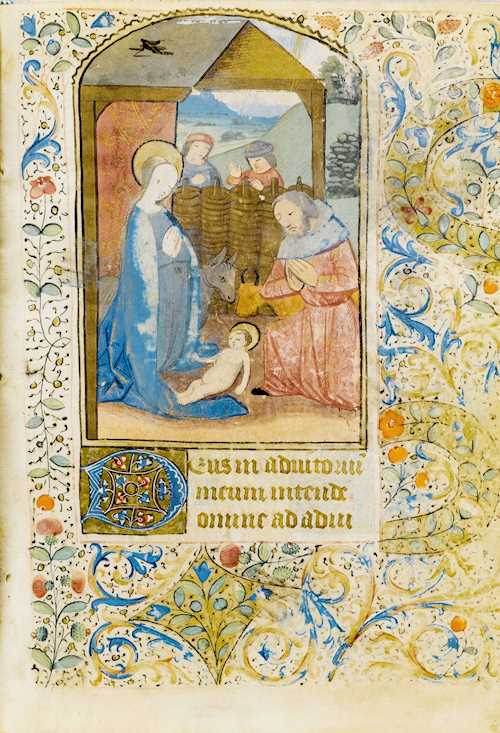 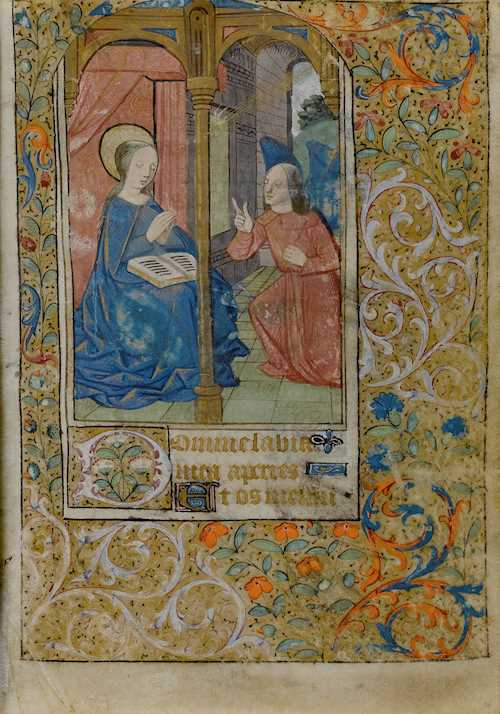 Latin Book of Hours on vellum, from the workshop of Robert Boyvin. 5 full-page miniatures: Annunciation, Nativity, Penitent King David, Crucifixion, pleurants, each with a floral border. Additionally with 12 three-sided borders and 99 smaller borders as well as numerous initials and line fillers. All in gold and colours. Made for the Le Roux family (?) and belonging to the Cauchois family in Bourgtheroulde (Eure) since the 17th century.
Rouen, c. 1490-1500. 8°. 130 leaves. Leaf dimensions approx. 17 x 11.5 cm; script area approx. 10.2 x 7 cm. 16 lines. Some bound leaves with old handwritten marginalia. Boards circa 1900 (spine cracking, slightly bumped, minor staining and browning).
The style of the Book of Hours presented here, with five full-page miniatures surrounded by rich foliate borders offset by geometrical motifs, is clearly connected to the splendid tradition of Parisian illumination circa 1500, which as we shall see, also supplied the region of Rouen with manuscripts and thus also inspired local illuminators from that region. This applies not only to the rich foliate borders and their distinctive divisional groupings in a wide variety of geometric forms, but also especially to the style of the figures, which can be best seen in the best preserved miniature, the Penitent King David. The rounded head shapes of the figures, depicted with pale flesh tones and restrained details, as well as their robust physique, are connected to the work of the illumination workshop around the anonymous Parisian illustrator named after the dedication copy of Robert Gaguin's French translation of the Gallic Wars for King Charles VIII and has hitherto been art historically recorded as the Maître de Robert Gaguin. Interestingly, his style is also associated with his significant influence on the Renaissance illumination of Rouen, which also applies to Robert Boyvin, who was active in Rouen and to whom the present prayer book can probably be attributed.

The region of Rouen, particularly the town of Bourgtheroulde located about 15 km southwest, stands in the foreground of the present Book of Hours. The common practice of recording family events such as birth, marriage and death dates in Books of Hours for private devotion can also be found here. Listed on the first pages of the book is the almost complete anagraphic data since the 17th century of the long-leading Cauchois family, confirmed in the birth and marriage registers of the town of Bourgtheroulde. An interesting aspect of our Book of Hours arises from the fact that in the 17th century the Cauchois became related through marriage with the Le Roux family, the barons of Bourgtheroulde. This Book of Hours may have been commissioned originally by the Le Roux family, possibly at the time they took over Bourgtheroulde (1499), and then through the marriage with the Cauchois, passed on to the latter. The prayer book remained in their possession with certainty until the 18th century.

The present Book of Hours was probably commissioned in Rouen from a local illumination workshop associated with the Maître de Robert Gaguin, that possibly also illuminated a Book of Hours offered by Heribert Tenschert in 1989 (Leuchtendes Mittelalter I, no. 78), and at that time was linked with the workshop of von Robert Boyvin.
(Prof. emer. Dr. Gaudenz Freuler, Universität Zürich)

Sold for CHF 23 480 (including buyer’s premium)
All information is subject to change.