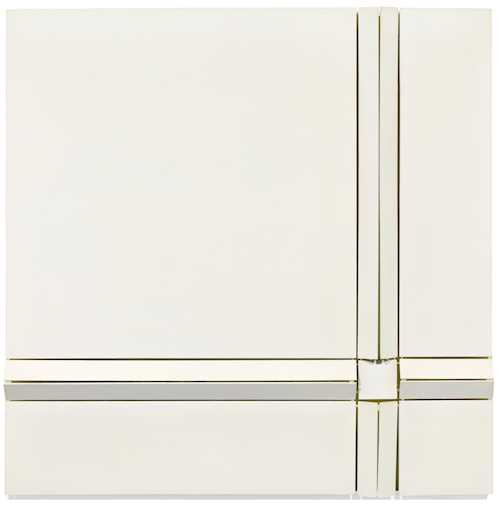 The play of light and shadow, the choice of colour and the resulting generation of movement in geometric motifs are at the heart of Luis Tomasello’s life’s work as an artist. He is one of the few artists who succeeded in creating a dynamic relationship between his work, its surroundings, and the viewer.

Luis Tomasello was born in Argentina in 1915 to a family of Italian origin. While the young Tomasello assisted his father in his work as a carpenter, mason, and painter, he also attended evening classes in drawing. His passion for art developed further, and finally led him to the Escuela Nacional de Bellas Artes Prilidiano Pueyrredón in Buenos Aires in 1932. This was then followed by studies at the Escuela Superior de Bellas Artes de la Nación Ernesto de la Cárcova in 1940. During this phase Tomasello encountered artists of the avant-garde such as Emilio Pettoruti and Carmelo Arden Quin, who had a decided influence on the young artist.

A trip to Paris in the 1950s led him to relocate to the French capital in 1957. There he joined an already substantial circle of Latin American artists. Tomasello’s works, initially of a figurative tendency, gradually transformed into geometric abstraction. Contained within are the incipient kinetic features which allowed him to express movement by means of visual effects. Thus the artist worked especially with an active surface structure, and in the process explored various forms and colours, which lend a dynamic to the flat medium. In this context, in Tomasello’s work even light and shade began to play a primary role, as their influence on optical perception is not insignificant. He created an outstanding series called “Atmosphère chromoplastique” which marked his breakthrough as an artist. As well as in numerous group exhibitions, these outstanding works were exhibited in solo shows including the Museo Nacional de Bellas Artes in Buenos Aires (1962), the Musée National d’Art Moderne in Paris (1976), and the Museum of contemporary art in Madrid (1996).

Since for him the three elements – the work itself, its surroundings, and the viewer – all play an important role and only by their interaction do they create a virtual space, Tomasello’s approach is often associated with Minimalism. In particular, the two artists Sol LeWitt and Donald Judd are pertinent here, since they too engage with these factors. At the same time, Tomasello’s work contains characteristics of Op Art, in which movement is created through abstract structures of colour and line. Thus, Luis Tomasello was able to look back on a multi-facetted artistic career in which he went beyond the two-dimensional expression of his composition and breathed life into his works in the form of movement.