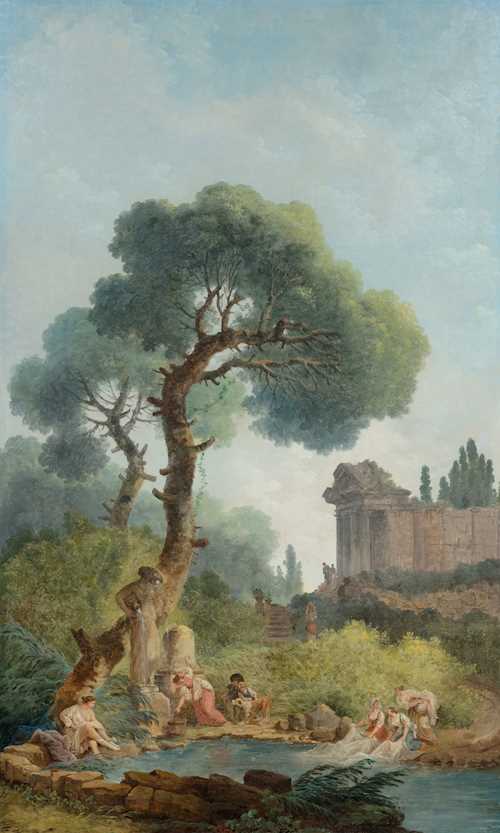 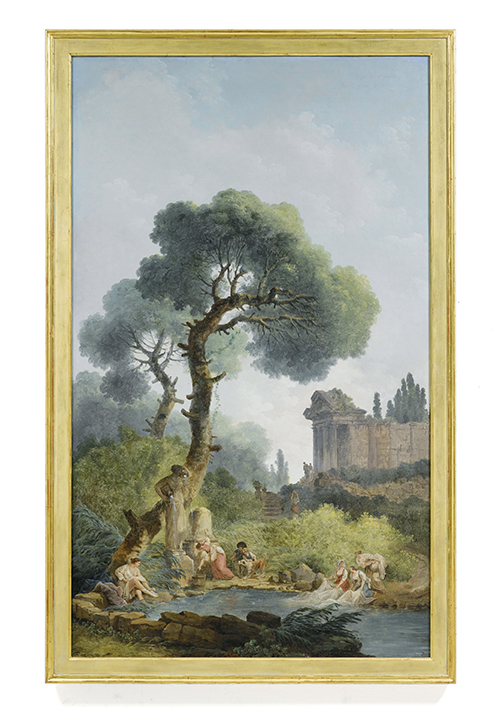 This atmospheric Mediterranean landscape depicting washerwomen at a spring with ruins in the background is a characteristic example of the work of the French landscape painter Hubert Robert. It is believed to have been a part of the interior decoration of the Hôtel Rouillé de l'Étang on the Place de la Concorde in Paris, now known as the Hôtel du Plessis-Bellière. David-Étienne Rouillé de l'Étang (1731–1811), who most likely commissioned a series of paintings from Robert around 1776, or at least selected the paintings for his stately residence, was a high-ranking government official. Since Rouillé remained childless, all his possessions passed first to his niece Adélaïde, Marquise de Pastoret (1765–1843), and later to his grandniece, the Marquise du Plessis-Bellière, born Marie-Louise-Thérèse de Pastoret (1817–1890). In 1897, part of the estate was auctioned off by the Parisian auction house Drouot, and thus the multi-part picture series was dispersed. Two of Robert's paintings, which today belong to the collection of the Metropolitan Museum of Art, appear to come from the same context. Instructions in the upper right-hand corner of the picture, as well as the treatment of the canvas edges provide information about the painter's working methods.

Hubert Robert specialised in both invented and accurate architectural views, which earned him the sobriquet "Robert des Ruines". His eleven-year stay in Italy played an important role in this, during which time he was in contact with Giovanni Battista Piranesi (1720–1778) and Giovanni Paolo Panini (1691–1765). In 1765 Robert returned to France, where the influence of his older contemporary François Boucher (1703–1770) is also visible in his work. In this view, for example, the woman at the left sitting on the water’s edge is a motif reminiscent of Boucher.

This painting will be published in the forthcoming catalogue raisonné of the works of Hubert Robert.