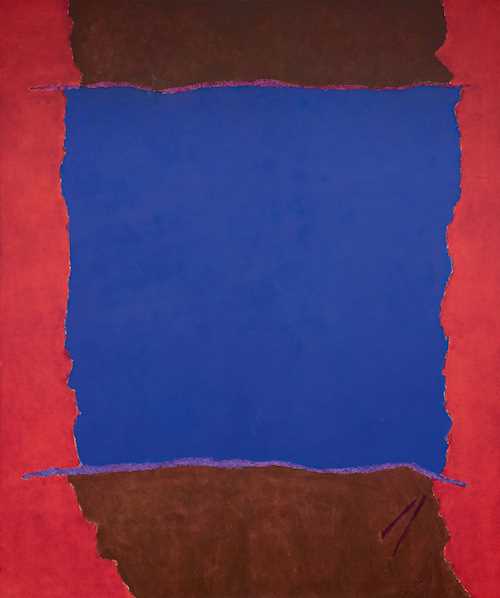 (New York 1922–1997 Ioannina/Greece)
Infinity Field, Lefkada Series. 1980.
Acrylic on canvas.
Signed, dated and titled on the overlap on the reverse: STAMOS 1980 INFINITY FIELD/LEFKADA.
180 × 152 cm.
Provenance:
- Galerie M. Knoedler, Zurich.
- Purchased from the above by the present owner, since then private collection Switzerland.

The Greek-born Theodoros Stamos was the youngest of the first generation of Abstract Expressionists and, with his oeuvre of paintings, was one of the group of Colour Field Painters around Mark Rothko, who are characterised by the broad expanses and reduced and contemplative use of colour. This is in full contrast to the Action Painters around Jackson Pollock.

Stamos, probably also because he outlived most of his fellow painters, developed a multi-facetted formal language in the course of his life’s work, which culminated in his mature work of the 1980s. While the composition of his “Sun-Boxes” in the 1960s was still quite strict, in his later series of the “Infinity Fields” his work became freer. He limited himself to 3 or a maximum of 4 colours, used fine but dynamic lines, and dispensed with defined forms. The colours, arranged harmoniously, some flowing into one another, but some also clearly delineated, are characteristic of his paintings.

He did not surrender himself to the Romanticism of his friend Mark Rothko, but allowed himself to be guided by his intuition, with regard both to form and colour.