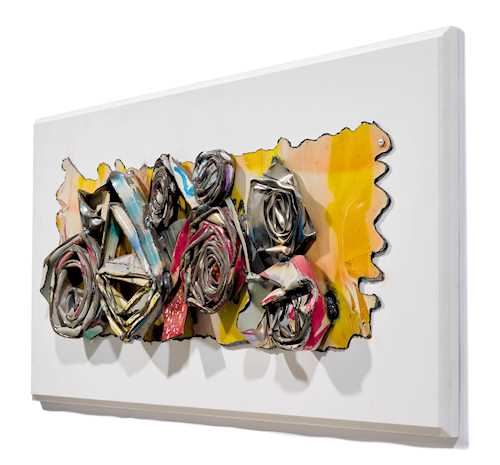 "I am more interested in seeing what the material tells me, than in imposing my will on it."
John Chamberlain

The US sculptor John Chamberlain is one of the most important pioneers of Pop Art and because his metal sculptures are rooted in Nouveau Réalisme and Abstract Expressionism, he can be seen as one of the central figures of American post-war art.

Raised in Chicago, John Chamberlain worked as a barber on an American Navy aircraft carrier during World War II. The three years spent on these massive metal ships influenced the budding artist's perceptions and interests. He attended the Art Institute of Chicago for two years from 1950, and in 1955 he studied for a short time at the renowned Black Mountain College.

In the late 1950s, he created his first collages and reliefs - an accumulation of individual parts put together - parts without an inner connection, but with a certain aesthetic appeal of their own. In the beginning he used flat materials such as painted or unpainted pieces of paper or cardboard, aluminium foil and various textiles, but before long small metal sheets also appeared in his collages (cf. Schwarz, Dieter. John Chamberlain, Paper Paradisio. Drawings, Collages, Reliefs, Paintings. Kunstmuseum Winterthur 2005, p. 14).

"I wasn't interested in cars per se, I was interested in either the colour or the shape or the amount - just the sheet metal. It already had a coat of paint on it. And some of it was formed." (John Chamberlain). As the artist stated, what mattered to him was not the origin of the material, but the pictorial effect of a reused material, in a new form. In contrast to artworks as assemblages or ready-mades, Chamberlain defined his works as autonomous sculptures that are no longer associated with the original objects - mostly sheet metal from automobiles. His "recycled" sculptures are understood in the moment, as a new appropriation, the result of his artistic expression.

The two works on offer from 1991 are good examples of Chamberlain's mature artistic expression: shinily painted, vibrant birthday greetings adorn the colourful horizontal cards, with metal bands in ceremonial folds, like ribbons tied on a gift. A cheerful painting made of rather crude steel. Despite the turbulence of the heavy material itself and the production technique, Chamberlain manages to convey a sense of individual strength, which in this case also achieves an almost ironic effect. Two works that wonderfully reflect Chamberlain's personality and excellent craft.