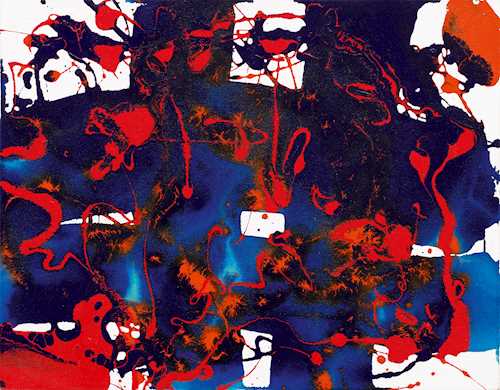 Sold for CHF 56 420 (including buyer’s premium)
All information is subject to change.

Painted in the last months of his life, Sam Francis' present work is part of the "Last Works" series, all of which reflect a fierce demonstration of his artistic will to create and are characterised by the artist's typically masterful use of colour.

In 1994 Francis went through an involuntary creative break. His cancer caused paralysis of his right hand and confined him to a wheelchair for several months. Since he had been in the habit of painting with both hands, he initially found it very unpleasant to only use his left hand. During this time, when his illness took hold, the artist produced around 170 paintings on canvas and paper, 152 of which are preserved today ("The Last Works"). Each of them is accorded a special significance in the artist's late work, with an individual date of completion on the reverse.
The present work gives no hint of Francis' physical and psychological weakness, yet in his usual manner it allows us to participate in a visual drama of primal power. Against an almost snow-white background, opulent overlapping lines of oceanic blue are laid out, contrasting with energetic splashes of deep red that take over the entire composition. Francis' work embodies contrast in two respects: the two primary colours used here, red and blue, are engaged in a conflict between order and disorder, structure and chaos. For while the blue lines embody structure and unity on the canvas, the confused reds create an unruly spectacle on the surface of the work.

With the present work, Sam Francis created one of the last pre-eminent arrangements of colour and form that seem to fight against the white surface like the artist against his incurable disease, leaving his mark on the canvas with unmistakable vibrancy.

Sold for CHF 56 420 (including buyer’s premium)
All information is subject to change.