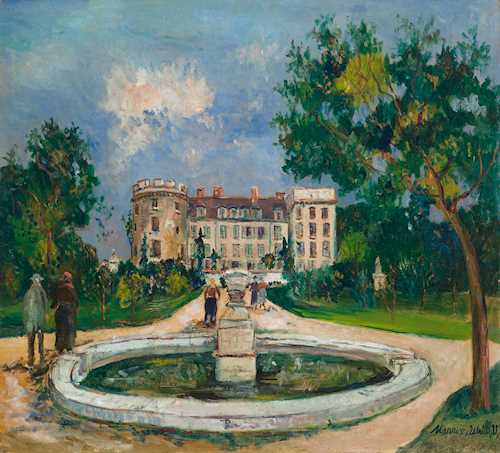 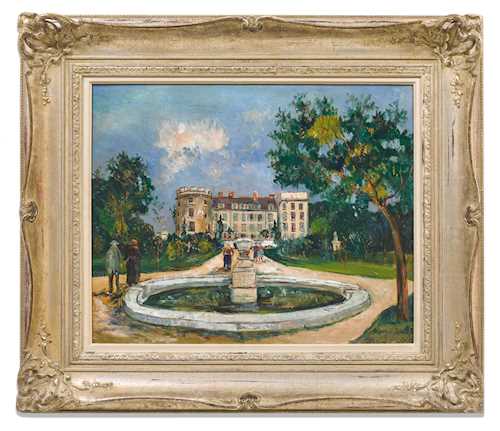 (Paris 1883–1955 Dax)
Château de Chaintré (Saône-et-Loire). Circa 1929.
Oil on canvas.
Signed lower right: Maurice, Utrillo, V.
Titled and signed on the reverse of the canvas: Château de Chaintré (Saône-et-Loire) / Maurice Utrillo.
50 × 61 cm.
We would like to thank the Association Maurice Utrillo for confirming the authenticity of the work, Paris, May 2021.

The present painting ‘Château de Chaintré (Saône-et-Loire)’ is characteristically distinct in the oeuvre of Maurice Utrillo. The artist, who grew up in the Parisian quarter of Montmartre, is primarily known for his café and street scenes of Parisian life. Due to its subject, the painting offered here presents a unique addition to Utrillo's oeuvre. While the work differs from the rest of Utrillo's oeuvre in terms of content, it fittingly corresponds in terms of style and colour with the artist's work of the late 1920s and early 1930s. Through the use of vivid and fresh colours, Utrillo has captured a moment of relaxed strolling in a castle park.

The Château de Chaintré depicted here is located in the commune of Crêches-sur-Saône, about an hour away from Lyon. Built in the 12th century, the castle was owned by the Chaintré family until the middle of the 16th century. The property was expanded during the course of several subsequent changes of ownership, including the addition of an English garden. Today the castle serves as a luxury residence.

It can be assumed that a trip along the Saône-et-Loire in the late 1920s inspired Maurice Utrillo to depict the château, which at the time was owned by a former deputy from Lyon. Perhaps Utrillo even painted the scene directly on the park grounds of Chaintré , as he typically created his works on site, as revealed in his Montmartre depictions. It is also possible, however, that the depicted scene is based on an image from a postcard of the castle that Utrillo could have used as an idea for his painting.