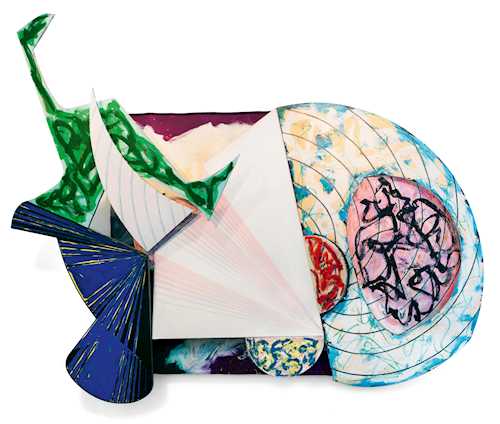 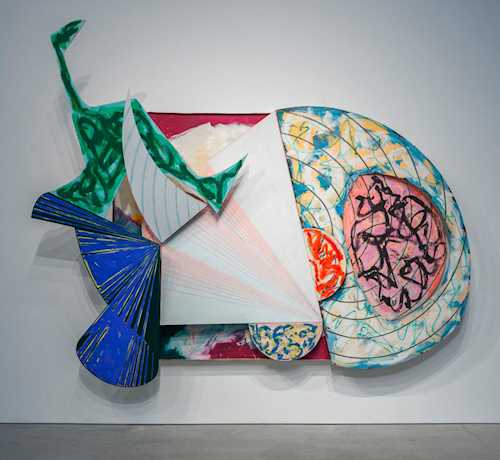 "One could stand in front of any Abstract-Expressionist work for a long time, and walk back and forth, and inspect the depths of the pigment and the inflection and all the painterly brushwork for hours. But I wouldn't particularly want to do that and also I wouldn't ask anyone to do that in front of my paintings. To go further, I would like to prohibit them from doing that in front of my painting. That's why I make the paintings the way they are, more or less." Frank Stella

Since the 1950s, the American artist Frank Stella has been one of the leading and most innovative exponents of Abstract Expressionism.

His "Stripe" paintings of the 1960s were prominent examples of Minimal Art, but soon revealed Stella's love of experimentation, as he quickly departed from the classical canvas format and worked with "Shaped Canvases".

This exploration of the relationship between painting and sculpture would become the overriding theme in Frank Stella's œuvre from the 1970s onwards. He left behind two-dimensional painting and turned his attention to the wall relief. He used this to analyse his position within painting and to attain a different, deeper approach. Although with this new medium a sculptural aspect entered his works, for Stella it was always about painting, in-depth analysis, and the possible further developments. His role models and inspiration were Pablo Picasso and El Lissitzky, who were already working with reliefs in the first half of the 20th century.

The early wall reliefs of "Exotic Birds" are still very close to his Minimal Art works. Over time, however, he moved more and more towards three-dimensional, and, in terms of painting, he turned increasingly towards Abstract Expressionism.

The present work "Giufa e la Berretta Rossa" belongs to the series of "Cones and Pillars" from the mid-1980s. Starting from an expressively painted canvas, individual elements made of aluminium of different sizes, shapes and designs are placed over and next to each other. In addition to the classically painted canvas, Stella uses different techniques for the individual panels, which when put together create an impressive harmony and energy. The artist masterfully plays with the painterly design of the surfaces. This monumental work exerts its maximum effect at a distance, when the interplay of the individual elements reveals its full impact.