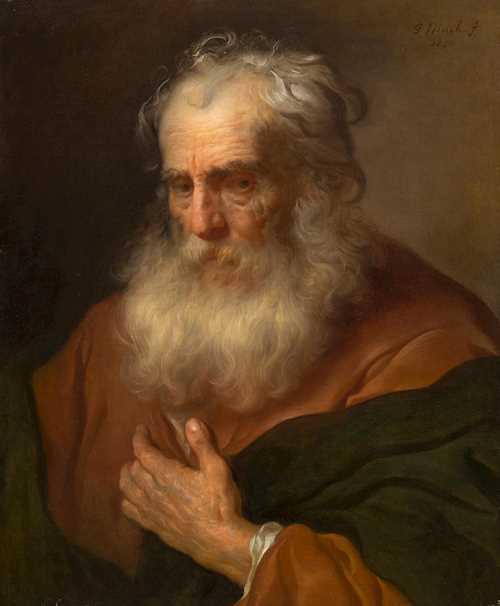 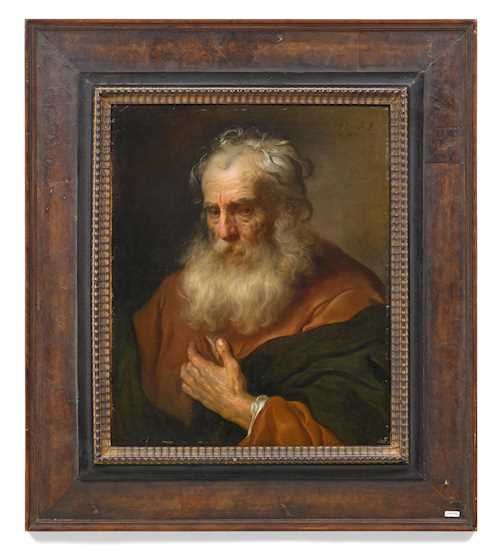 This impressive portrait of an old man with a beard by Govaert Flinck was last on public view in the Amsterdam exhibition of 2018. It is known as a ‘Tronie’, a pictorial genre typical of the 17th century, showing a portrait-like character study in fancy dress, or with an interesting physiognomy. The sketch-like painting style of our picture makes the sitter appear particularly lively and lifelike, his grey beard and head of hair are brilliantly rendered with individual impasto brushstrokes.

Govaert Flinck was one of the most important pupils of Rembrandt van Rijn (1606–1669). He worked in the master's Amsterdam workshop between 1635 and 1636 and subsequently established himself as an independent painter (see Arnold Houbraken: De Groote Schouburgh de Nederlantsche kontschilders en schilderessen..., Amsterdam 1718–1721, vol. II, p. 18).

J. W. Von Moltke describes the man depicted here as Saint Peter (see Literature), while Werner Sumowski stresses that the lack of attributes creates a probably deliberate ambiguity. The unidentified sage also seems to have served as a model for Rembrandt, for example in his famous 1636 'Sacrifice of Isaac', now in the Hermitage in Saint Petersburg (inv. no. ГЭ–727). The delicacy of the present Tronie points to the fact that it was certainly painted directly from the model, as indicated by the extremely detailed beard and the deep folds of the face and hand, as well as a possible pentimento in the crown. The well-preserved paint surface is characterised by an energetic, virtuoso use of colour, fluid brushwork in the hair and beard and fine facial modelling, which is especially typical of the last decade of the artist's life. The softly flowing application of paint differs stylistically from Rembrandt's Tronies and reflects Flinck's independence from the master in his mature work.

After examining the original, Tom van der Molen has confirmed the authenticity of the work, and that he will include the painting in the catalogue raisonné of the artist, which is due to be published. He emphasises that it is a characteristic and high-quality example of the late Tronies by Govaert Flinck.

Sold for CHF 833 300 (including buyer’s premium)
All information is subject to change.