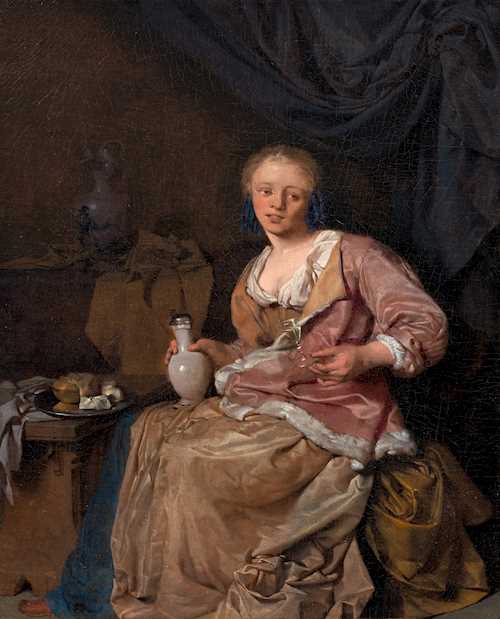 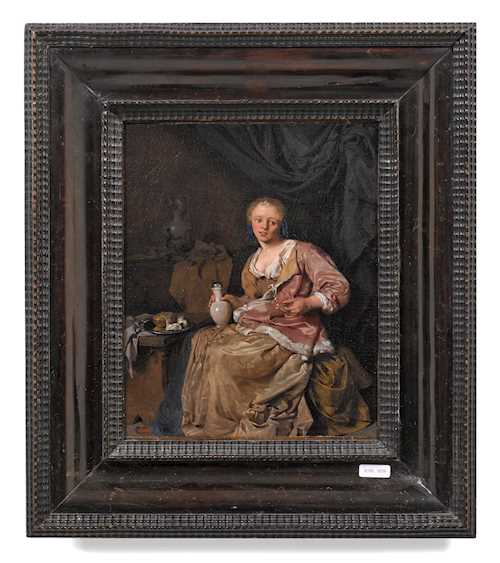 In the 2012 exhibition catalogue, Peter van den Brink dedicates a detailed entry to the painting offered here and emphasises its high standing in Bega's oeuvre as well as its extraordinary artistic quality:

"Having long been hidden from view in a French aristocratic collection, this hitherto unpublished painting is able to give us an idea of what Cornelis Bega could still have achieved in his painting career, had he not been carried off by the plague on 27 August 1664 while in the prime of his life. This wonderful little painting proves that Bega was already following in the footsteps of contemporaries such as Gerard ter Borch (1617–1681), Gabriel Metsu (1629–1667), Frans van Mieris (1635-1681), Jan Steen (1626–1679) and also Johannes Vermeer (1632–1675). [...]

“A superlative colourist with a sublime, natural feeling for the rendering of different materials, he belonged to the guild of fine painters. Gone are the destitute have-nots from his tavern scenes; instead Bega paints a young lady swathed in exquisite fabrics in refined hues, from golden green and salmon grey to pink and the deep blue ultramarine of elegant hair bands, carefully coordinated. The diversity of the ravishing fabrics offered Cornelis Bega ample opportunity to demonstrate his virtuoso painting technique, as he did, for example, in the musical duets in Stockholm and in Paris (see exh. cat. 2012, cat. nos. 71 and 72).

“Not only the sophisticated colouring and the typical arsenal of parallel, short hatchings for the elevations in their various nuances are indicative of this painter’s hand. In addition, the young lady depicted here was one of Cornelis Bega's treasured models. She appears, for example, as a woman playing a lute in Stockholm (see exh. cat. 2012, cat. no. 71); as a sleeping maid, and at prayer before a meal in Amsterdam (see exh. cat. 2012, cat. no. 58) where she can be seen in profile. All three paintings bear the date 1663. Although the ambience, compared to the shabby taverns, has changed fundamentally, the motif remains more or less unchanged. Her open jacket betrays the young woman, who has just poured herself a glass of white wine, as a courtesan. [...]

“The sheen on the jug and wine glass, rendered much more luminously than on the satin fabrics, is a real feast for the eyes, as is the still life with bread and cheese next to the young temptress. Cornelis Bega has placed her in an interior closed off with blue drapery, reminiscent in many ways of the indeterminate space in which he placed the Lute Player and the Fiddlers in Stockholm (see exh. cat 2012, cat. no. 71). Although this time the painter has dispensed with the astonishing still life of musical instruments, both the little table in the foreground and the Italian majolica pot in the background on the left are established studio features that can also be found in other works, including The Music Lesson in Stockholm" (freely quoted from exh. cat. 2012, pp. 250-252).

Cornelis Bega was the son of the sculptor Pieter Jansz. Begeyn (1600–1648) and Maria van Haarlem, the daughter of the famous Haarlem Mannerist Cornelis Cornelisz. van Haarlem (1562-1638). His artistic environment provided fertile ground for a successful career as an artist, but his preference for depicting peasant life in all its facets caused conflict with his father. The biographer Arnold Houbraken reports that this ultimately led to Bega's name change (Arnold Houbraken: De groote schouburgh der Nederlantsche kontschilders en schilderessen, Amsterdam 1718-1721, pp. 349-350). Cornelis Bega studied under Adriaen van Ostade (1610-1685), who himself was a pupil of the great portraitist Frans Hals (1582-1666). Bega worked in Van Ostade's workshop for about 4 years and then travelled to Germany and Switzerland. From 1654 he is listed as a member of the Haarlem Painters' Guild, where he worked until his early death at the age of only 33. The plague epidemic to which he fell victim had been raging in the Netherlands since 1663 and spread from there to England, where it decimated a fifth of the population in 1665.

An inscription on the reverse of the canvas indicates the aristocratic French provenance of our painting. The Marquis de Colbert is probably Pierre de Colbert (1834–1905), who enlarged the Château de Saussay, located about 35 kilometres south of Paris, in the 19th century. In 1911, its ownership passed to the Bourbon Busset family via his daughter Guillemette. The château is still inhabited today by the descendants of the Bourbon Busset family.