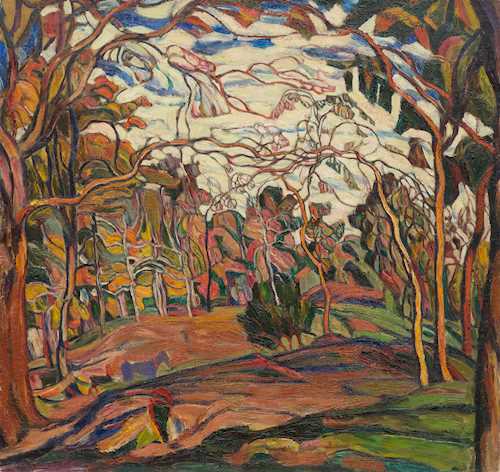 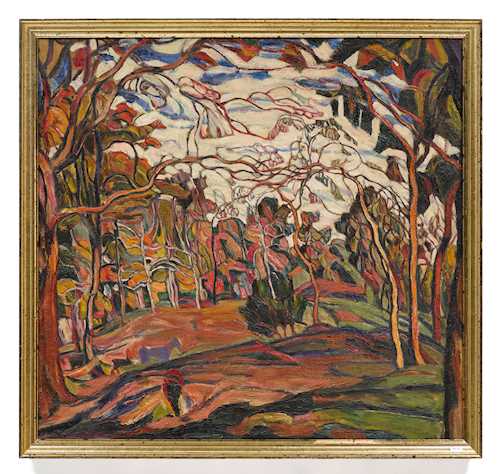 ‘Through the Trees, Fairy Park’ is an excellent example of the extraordinary artistic mastery shown by the Russian-Ukrainian artist Abraham Manievich in the 1910s. The painting was created around 1919, shortly before the artist immigrated to the USA. By that time Manievich had already become a recognised artist in Russia. He had booked solo exhibitions in various European cities and his works had been acquired by major museums.

The present painting was created at this climax. Typical for Manievich, a wooded landscape is depicted. The elegant, complex network of branches is a characteristic compositional device employed by the artist and is exemplary of his best work. ‘Through the Trees, Fairy Park’ relates to two other Manievich paintings that are very similar in composition, ‘Paysage Lyrique’ and ‘Bronx River Park’. Our painting, however, is the first and therefore the earliest version, which is reflected among other things in the spontaneous application of paint that is lost in the second and third versions. Manievich created the second version, ‘Paysage Lyrique’, on commission from a client, possibly after he had seen our early version. Our painting remained in the artist's possession until his death, later passing to his daughter and finally to the artist's estate.