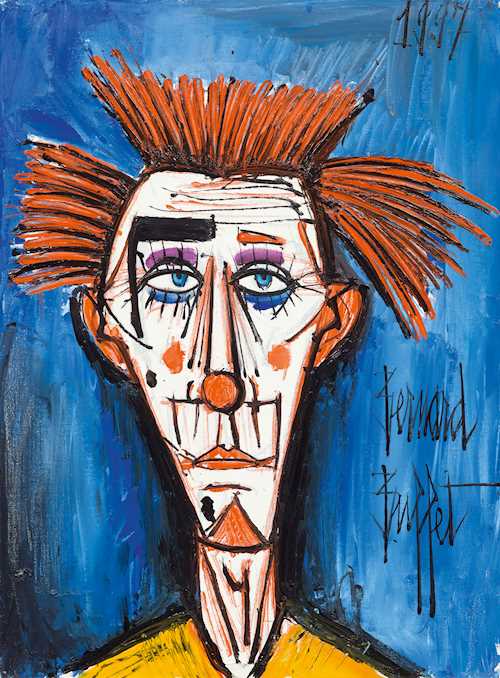 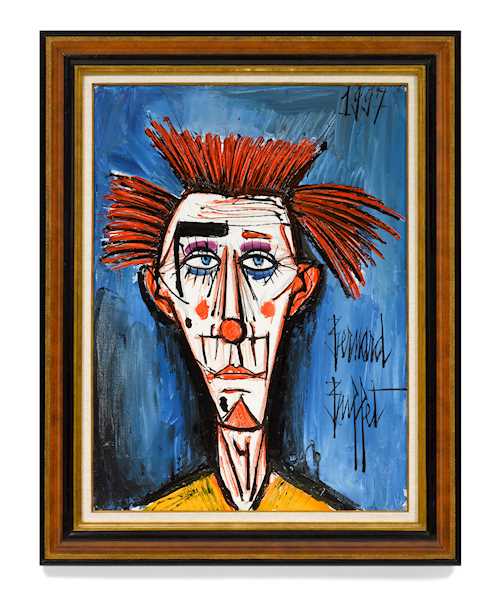 Provenance:
- Galerie Rienzo, New York (stamp and label on the reverse).
- Swiss private collection, acquired from the above gallery on 11.11.2000.


The image of a clown first appeared in the work of Bernard Buffet in 1955. At that time, Buffet made a series of circus depictions featuring clowns as well as performers and trapeze artists. The subject had been popular since the early 20th century and had already been adopted by Picasso, Rouault, Chagall and other contemporaries before Buffet. Buffet's unique style resonated strongly with contemporary art viewers and the clown portraits further boosted public opinion of Buffet's work. In the 1950s, there was an absolute "Buffet craze”. The artist was suddenly to be seen on TV and in magazines everywhere. It went so far that Buffet was even chosen as the best artist in Paris by the magazine Connaissance des Art: "Modern and postmodern art has only known one real pop star, and his name was not Picasso, Dalí or even Warhol, but Bernard Buffet”. (Roob 2008, p. 43).

Recalling this high point of his career, Buffet repeatedly revisited the subject of the clown throughout his work, to the extent that this image practically became a trademark of the French artist. The present work, "Clown Hirsute fond bleu", was created in 1997, more than 40 years later. Applied with thick layers of oil paint through the use of a palette knife, Buffet has rendered a vibrant, yet melancholic clown against a bright blue background. This contrast of merriment and "miserablism" has long been associated with Buffet's art. Reflecting on the emotional tension inherent in these works, the artist’s wife, Annabelle Buffet observed: "Only the clowns, his lifelong friends, are his interpreters. They are multi-facetted characters, specialists in mockery, and wonderfully reflect the emotions, the struggles, that Bernard expresses through them." (Garnier, Buffet 1992, p. 7/8).