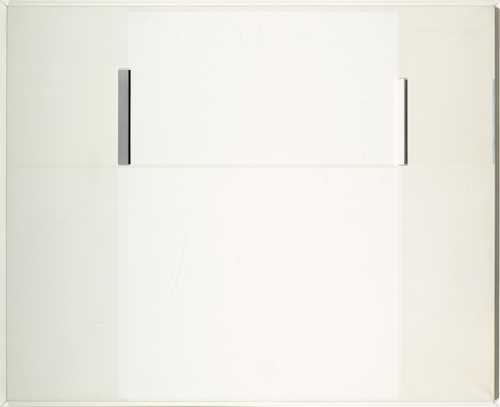 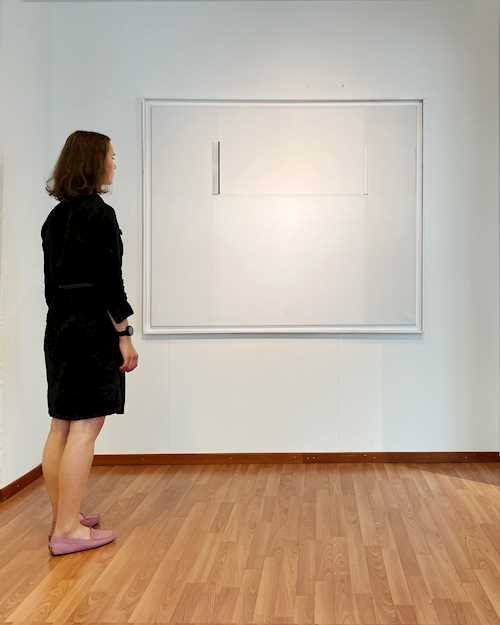 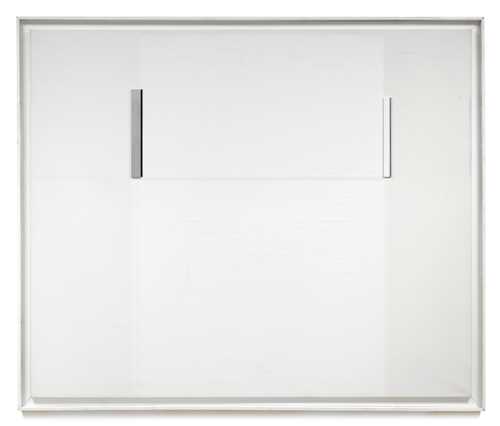 (1933 Taichung 2011)
Painting Relief 13 September 1965. 1965.
Oil, aluminium and perspex on canvas.
Signed on the overlap: LIN. Also signed, dated, with measurements and directional arrows on the stretcher: LIN 13-SEPTEMBER-1965 50×60.
127 × 152.5 cm.
The Estate of Richard Lin Show Yu confirm that this work will be included in the forthcoming Catalogue Raisonné of the artist. We thank the artist’s Estate for their kind assistance.

pei in 1985. Richard Lin left England in 1981 and lived in Taiwan again until his death in 1988.
Richard Lin became famous for his predominantly white "relief paintings". He painted several layers on top of one another, allowing each layer to dry before applying the next, so that the white, monochrome canvas nevertheless showed colour differences and edges. With the canvas prepared in this way, he would then apply his reliefs. In the present work from "13 September 1965", there are 2 vertical bars in the upper third of the canvas: on the left, an elongated piece of aluminium with a narrow black stripe painted on its right side; on the right, a white piece of Plexiglas, complemented on the right by a narrow strip of aluminium. They border a white square on the right, left and bottom, created by the multiple application of paint.

Lin skilfully plays with the viewer's perception. Both the canvas, which is not uniformly white, and the different materials of the reliefs unsettle us and cause us to check our assumptions about our visual experience. Looking at the work, we suppose that it is a monochrome white painting and also that the reliefs are identical — but neither is true; the individual reliefs are the same length, but differ in width, height and material. Recognising this is unsettling and challenges the viewer to check and adjust their preconceptions.
"Relief Painting 13 September 1965" is an outstanding example of Richard Lin's expert handling of the relationship between painting and architecture, and at the same time between Western and Eastern art traditions.