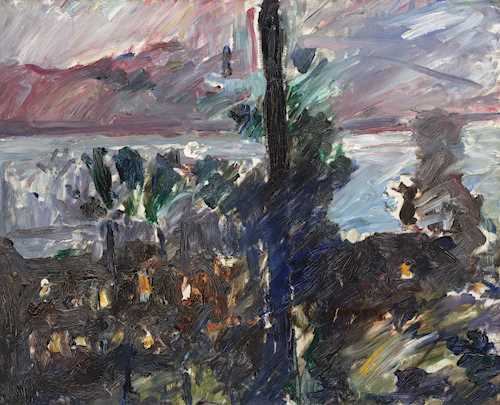 Back
Lot 3251
LOVIS CORINTH
Nacht am Walchensee (Night at Walchensee). 1924.
Oil on board.

Sold for CHF 293 100 (including buyer’s premium)
All information is subject to change.

In 1918 Lovis Corinth and his wife Charlotte visited the mountain village of Urfeld in Upper Bavaria for the first time. The Corinths were so captivated by the surrounding landscape with its impressive lake, the Walchensee, that they built a wooden chalet on the mountainside there the following year. The Bavarian country house became their holiday home and retreat, a place where Corinth could devote himself entirely to his painting. There, he produced his late work, which was dominated by the Walchensee pictures. Corinth devoted over 60 works to the lake, which was both beautiful and uncanny, portraying it from different vantage points in varied seasons and weather conditions.

The present painting, 'Nacht am Walchensee' (Night at Walchensee), was painted in 1924 and likely shows the view from the terrace of the Urfeld property. As typical in many of his Walchensee paintings, Corinth has also placed a tree at the centre of the composition, thus preventing the viewer from an unimpeded view of the lake. These paintings represent a high point in Corinth's oeuvre and show the artist's development from classic Impressionist to Expressionist in terms of both motif and technique. The art historian Curt Glaser wrote of these lake landscapes: “He doesn’t paint the beauty of Walchensee, doesn’t paint a piece of nature, [...] instead he gives shape to his vision of reality in forms and colours [...]. Within these pictures there is no sky and water, no mountains and meadows, no trees and houses, there is only one, unitary, chromatic matter throughout, a seamless fabric of swelling colours and fading tones” (translated from German).

Our painting comes from the important collection of Udo and Dora Rukser. As a well-situated lawyer and passionate art collector, Udo Rukser probably acquired this Walchensee painting at the Leo Grünpeter auction in Berlin in 1927. After Rukser resigned from his position as editor of the 'Zeitschrift von Ostrecht' in 1933 in order to show solidarity with his Jewish colleagues, he retired with his second wife Dora Rukser, the sister of Dadaist Hans Richter, to an orchard on Lake Constance near Radolfzell. Rukser had already amassed a considerable art collection by that time. Dora Rukser, who was Jewish, fled to Switzerland a few years later due to repressive measures and stayed with Swiss family friends, the ancestors of today's owners. Finally, in 1939, Udo and Dora Rukser emigrated to Chile with their art collection. The painting by Lovis Corinth remained in Switzerland, between 1939 and 1948 in the safekeeping of the Galerie Raeber in Basel.

Between 1943 and 1946 in Chile, Rukser published 'Die deutschen Blätter', one of the most important German exile magazines against a German Europe. This was largely financed by the sale of his art collection. Our Walchensee as well as the remaining works of art, mainly works on paper by German Expressionists (see Lot 3254 and 3258), later passed to the family of the present owners, as part of an inheritance .

Sold for CHF 293 100 (including buyer’s premium)
All information is subject to change.