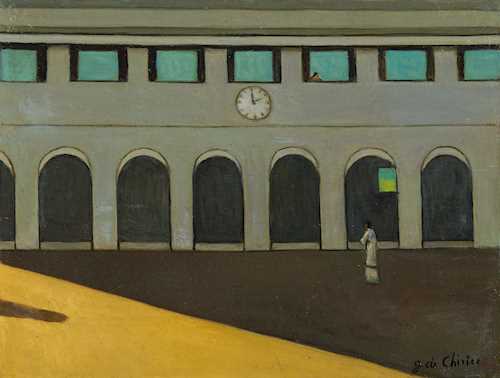 Sold for CHF 177 200 (including buyer’s premium)
All information is subject to change. 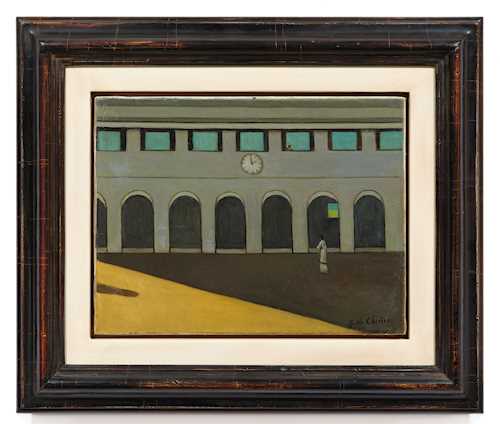 Around 1970 Giorgio de Chirico returned once again to a subject he had repeatedly dealt with since his beginnings. The first Enigma of the Hour, 'L’enigma dell’ora' from 1912, had been exhibited the following spring at the Salon des Indépendants in Paris and had attracted a great deal of attention from the French poet Appollinaire, a friend of the artist. Both shared a preoccupation with philosophy and depth psychology, which in the case of de Chirico led to his own style of metaphysical painting.

Whether the depiction is of the old railway building of the Gare Montparnasse in Paris or an Italian piazza is of secondary importance — the architecture is in any case merely a backdrop for existential questions beyond that which is perceptible in the natural world through the senses. Thus, in the present work is the question of time — the passing, the lost, the infinite time. The obvious symbol of the clock, together with the absence of perspectival depth, the massive shadows, the flat darkness behind the arches of the walls and, except for a schematic white figure, the eerie emptiness of the square all serve to charge the painting with an allusive, ominous mood.

Sold for CHF 177 200 (including buyer’s premium)
All information is subject to change.