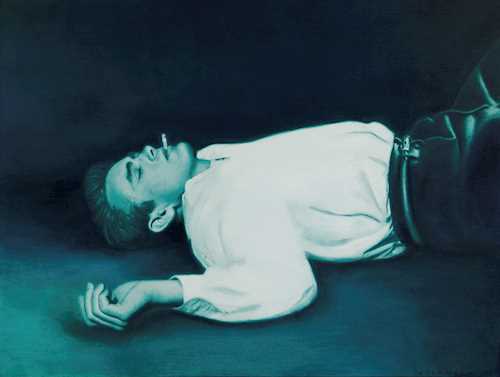 “At some point, however, I realised that art was the only option for me after all. Maybe it's a defect, but from an early age I always saw violence around me and the effect of violence: fear."

Wounded children covered in blood, bandaged, disfigured bodies, gloomy comic figures - Austrian artist Gottfried Helnwein fascinates and shocks in equal measure with his hyper-realistic large format works. His portraits, based on photographs, deal with themes such as torture, injury, and violence, focusing on the human being as a defenceless victim at the mercy of a dystopian society.

A metaphor for the shattered imagination, creativity and innocence of human existence, the artist makes use not only of the figure of the child, but also of personalities from mainstream and American popular culture, as the present work demonstrates.

The almost life-size image portrays James Dean, one of the most influential film icons of the US post-war period. While on the one hand the portrait is captivating because of its technical perfection, on the other hand it tackles critical issues surrounding mass media, commercialisation and those who suffer as a consequence. At first glance, the painting, which is based on a photograph, radiates neither fear nor violence; instead, it is imbued with an overwhelming sense of heaviness and gloom. Against an almost black background, the reclining actor appears in high contrast. The question of his condition and the context of the situation remains unclear. Despite the lit cigarette, the snow-white shirt, as well as the languid facial features and powerless posture suggest an empty shell of Dean rather than a sleeping state. The heaviness that unfolds in the reclining, so-called "fallen angel" is entirely devoid of the stylistic devices suggesting violence. Deviating from traditional visual conventions, with this portrait Helnwein once again communicates his critique of society in an unmistakable and yet subtle manner.