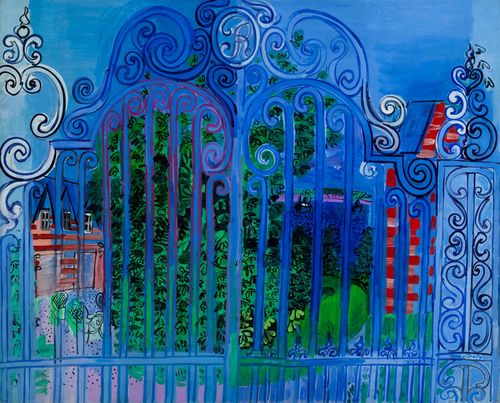 We stand before a large, charmingly ornamented trellis gate through which we see a grand estate on the coast of Normandy. We glimpse part of the elegant château at left and a corner of a garden house to the right, a splendid park with a large and densely overgrown shrub just behind the gate and a breathtaking view of the ocean; through the bars two ships can be seen in the bay. The scenery as a whole invariably casts a spell. Raoul Dufy loves to paint the splendid mansions and palaces created for aristocrats in the most beautiful areas of France. This château on the Normandy coast belongs to Baron de Rothschild, which is why an "R" was inscribed in the grille. Not infrequently, the imposing gates that enclose such estates and large gardens are depicted in Dufy's works. He is fascinated by the graceful sweep of the elaborate trellisworks and their framing of horizontal and vertical lines, which appeals to his baroque playfulness. But only in this painting does the subject take over completely. It is similar to the window that the painter of classical modernism often used; a "gateway" to another world as such, though here it remains closed. Though hardship and misery may always exist in the outside world, all of this seems to be locked out by this elegant gate. This is open to no one who might disturb the idyll. The atmosphere of perfect serenity is produced moreover through the harmony of the dominant and for Dufy wholly typical colours: a luminous yellow-green, a cool blue-green in the foliage, the soft blue of the sky, the dark blue sea, the red of the bricks and the lavender-violet of the gravel walk. This rainbow of colours can also be found in the gate, which unites and reflects all of the hues. The warm red tones of both houses are as beautiful as the dominant blue tones. Since the Fauvist maritime landscape emerged, the colour blue predominates in Dufy's oeuvre. In 1951, he explained this preference as follows: "Blue is the only colour that in all degrees preserves its own individuality. Take blue with its various shades, the darkest to the most light; it will always be blue". (in: Courthion, Pierre. Raoul Dufy, Geneva 1951, p. 52). A little later a painter named Yves Klein acknowledges this as well and progresses to the well-known radicalization of the idea. Monumental in size, the present work is imbued with the joie de vivre so characteristic of Raoul Dufy’s paintings. He is indisputedly the painter of joy, such that Gertrude Stein in 1946 even said of him: "Dufy est un plaisir" (Stein, Gertrude. "Raoul Dufy“ [1946], printed in Les Arts plastiques, No. 3-4, Brussels, March-April 1949, p. 135).

Sold for CHF 825 000 (including buyer’s premium)
All information is subject to change.