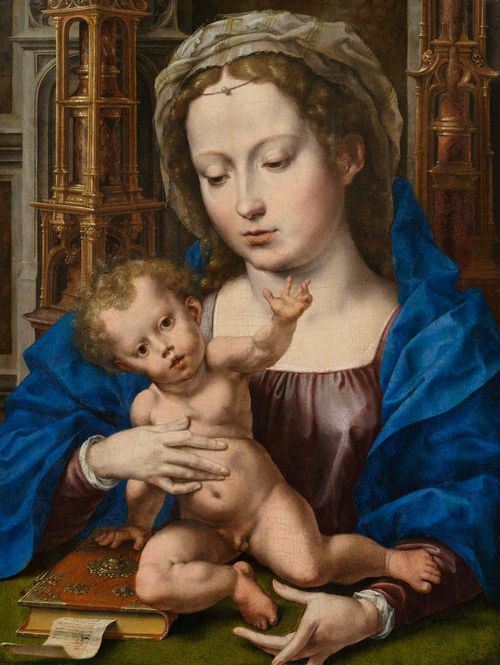 This important and outstanding painting with Mary and the Child by Jan Gossaert was recently subjected to detailed examination in the original during preparations for the large exhibition and catalogue raisonné of the Flemish master's work at the Metropolitan Museum of Art, New York, by curator Dr. Maryan W. Ainsworth and she was convinced of its authorship.

The painting is of exceptional rarity, since the limited oeuvre of the Fleming comprises about 60 works and the majority are in prestigious museums: among others, the Metropolitan Museum of Art in New York, the National Gallery in London, the Gemäldegalerie of the National Museums Berlin, the Museo del Prado in Madrid, and the Hermitage in St. Petersburg. Only two paintings of this subject are in private collections, of which the work offered here is one.

Jan Gossaert, also called Mabuse after his birthplace Maubeuge in Hennegau, counts as one of the outstanding painters of the Renaissance north of the Alps. His work combines the tradition of early Netherlandish painting from Jan van Eyck to Memling with the artistic achievements of the Italian Renaissance and transforms them into an ideal synthesis of the highest perfection. Gossaert, who was active in the first third of the 16th century, completed both religious as well as secular paintings, which he created for the major patrons of his day. Thus Gossaert entered into the service of Philip of Burgundy and followed him in 1508/09 to Italy, where he came to terms with the masterpieces of the Italian Renaissance.

The painting with Mary and the Child by Jan Gossaert offered here was in the collection of Dr. Alfred Hausammann in Zürich beginning approximately in the mid-1950s, and was on loan to the Kunsthaus Zürich for display from 1960 to 2001. In addition, the painting was shown in two exhibitions: "Meisterwerke Flämischer Malerei" (Masterpieces of Flemish Painting) at Schaffhausen in 1955 and "Gossaert genaamd Mabuse" (Gossaert called Mabuse) in Rotterdam and Bruges in 1965. The painting was mistakenly believed to be the work of a follower after the appearance of Sadja Herzog's study. In 2002, the painting came up for auction with this attribution in London. The present owner arranged for a careful and professional restoration in which the old overpainting was removed and the original appearance was again brought to the fore. In addition to the internationally recognized Gossaert connoisseur Dr. Ainsworth, who lists it as an autograph work by Gossaert in her exhibition catalog of 2010 (which also serves as the catalogue raisonné); Dr. Jochen Sander, Curator of German, Flemish and Dutch painting at the Städel Museum, Frankfurt, also has no doubt as to Jan Gossaert's authorship.

The composition shown here depicts the Mother of God in front of a late-Gothic architectonic throne, part filigree and part solid stone, with the infant Jesus sitting before her on green velvet. Each is turned towards the viewer in a frontal pose. While Mary assumes a contemplative attitude, gazing downward and embracing her child protectively, the Christ Child through his expansive gestures and direct eye contact, engages the attention of the viewer, and his childlike exuberance is expressed affectionately.
Maryan W. Ainsworth sees strong stylistic and compositional parallels between our painting and a depiction of Mary with the infant Jesus before a landscape, signed and dated 1531, in the Cleveland Museum of Art (fig. 1, oil on wood, 48.9 x 38.4 cm, see Ainsworth, ibid., no. 20), and for this reason proposes a dating of 1530 for our panel. Gossaert painted several other similar compositions with the Virgin and Child, all of which are among his late work, dating between 1525 and 1530. These include versions in the National Gallery in London (ibid., no. 13), the Gemäldegalerie of the Berlin State Museums (fig. 2, inv. no. 650, ibid., no. 15) and the Museo de Bellas Artes in Bilbao (ibid., no. 18). It is probable that this theme of the Madonna and Child enjoyed a growing demand and the paintings were conceived for the private worship of devout patrons.
Dr. Sander also compares our painting stylistically with Gossaert's "Danae," dated 1527, at the Alte Pinakothek in Munich; particularly the attentive gaze of the Child and the Madonna's head type, which leads him to consider a somewhat earlier dating of the middle 1520s as well (Sander ibid., p. 430, footnote 22).

It is certainly worth noting as well the preservation of the painting offered here, as Jochen Sander has previously remarked in his article (see Literature). He emphasizes that the picture, probably painted on two vertically arranged oak boards, is largely preserved in its original state. Through the cleaning conducted recently, fine glazes in the shadows of the flesh tones have come to light. With infrared reflectography underdrawing can also be discerned in some places that enables us to reconstruct the artist's working process.

Sold for CHF 2 377 500 (including buyer’s premium)
All information is subject to change.