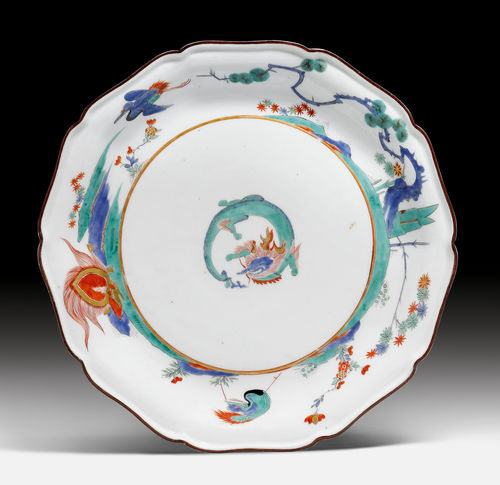 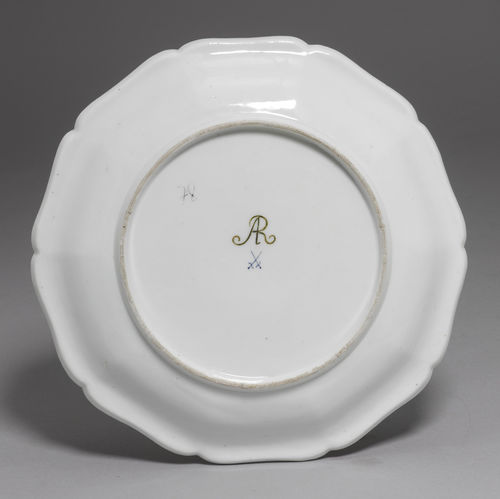 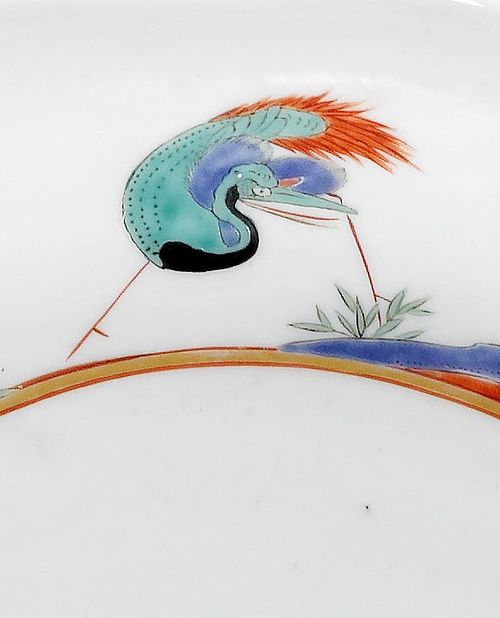 VERY RARE 'FLAMING TORTOISE' PLATE FROM THE COLLECTION OF AUGUSTUS III, KING OF POLAND AND ELECTOR OF SAXONY (1733-1763).

The von Hoym–Lemaire Scandal
This extremely rare plate is a witness to an eighteenth-century Franco-Saxon scandal complete with deception, greed, and the downfall of a powerful minister. Behind the scandal, however, lies one of the greatest early financial successes for the Meissen porcelain manufactory.

In the second half of the 17th century, collecting porcelain from the Far East was a passionate hobby for many wealthy European merchants and nobles. Kaolin (the special clay required to make porcelain) had not yet been discovered in Europe, and these fabulous and fragile wares had to be shipped halfway around the world. The pieces that arrived intact were consequently rare and exceedingly expensive.

All of this changed in the early years of the 18th century, when August the Strong’s royal porcelain manufactory at Meissen in Saxony discovered the secret of pure white porcelain. For the first time, a European manufactory could produce wares to rival those of China and Japan. Meissen had found the magic formula – but would wealthy collectors used to the original Asian wares purchase these European imitations?

Meissen’s products, mainly decorated with chinoiserie motifs, enjoyed a certain success throughout its first two decades of existence, but competition from other European manufactories – and especially from the Asian products themselves – was strong. The idea for Meissen’s breakthrough product was to come from an unlikely source: a French ceramics merchant, Rodolphe Lemaire.

The son and grandson Parisian ceramics and glass dealers (but left to start from scratch after his debt-ridden father’s death), Lemaire observed the rising popularity of Japanese “Kakiemon” wares with great interest. Collectors – including August the Strong himself – were paying huge sums to have such pieces shipped from Japan. In 1728 Lemaire wrote to August the Strong, proposing a deal: Lemaire would supply models of Asian porcelain from his own collection to the Meissen workshop. In return, the Meissen craftsmen would produce reproductions of these models and sell them to Lemaire for exclusive distribution on the French market.

In order to achieve this plan, Lemaire enlisted the aid of Count Karl Heinrich von Hoym. Ambassador to the court of Versailles for Saxony and Poland throughout the 1720s, von Hoym was also a passionate collector of porcelain, and probably a client of Lemaire. When the Count was recalled to Saxony in 1729 to become minister of Internal Affairs and director of the Meissen manufactory, he was in the perfect situation to assist Lemaire in his mercantile schemes.

Together they managed to convince Augustus to supply Lemaire with the Meissen porcelain he needed. Some wares Lemaire ordered undecorated, which he sent to Holland to be painted in the fashionable Kakiemon style (the Dutch workshops were long accustomed to imitating Asian porcelain), then to be finished at Meissen before being shipped to France for sale. Others were apparently wholly decorated at Meissen, by the brilliant painter J.-G. Höroldt. The pair even managed to obtain Japanese pieces from the private collection of Augustus as models to be copied by Meissen’s craftsmen.

The success of the Meissen “Kakiemon” wares was immediate and far-reaching. Collectors throughout Europe, but especially in France, avidly purchased these exquisitely decorated wares, made in a wide variety of forms and sold for a much more reasonable price than their Japanese counterparts. Lemaire and von Hoym began to wonder –what if these wares could be passed off as authentic Japanese porcelain, and sold for a much higher price? For that to be possible, they would have to somehow remove the Meissen manufactory mark: the famous blue crossed swords. Lemaire requested that the pieces in the next delivery from Meissen be marked on top of the clear glaze, and not under it as was customary, allowing the mark to be easily removed.

In the meantime, Count von Hoym’s arrogance and Francophile tendencies were making him numerous enemies in Saxony. His business relations with the Frenchman Lemaire were at the center of accusations which led to the search of his Dresden residence in 1731. Thousands of pieces of porcelain were seized, and all were confiscated by Augustus and taken to his Japanese Palace in Dresden.

The present plate was apparently a part of this confiscated porcelain. It bears the particular blue crossed swords mark corresponding to the porcelain ordered by Lemaire in 1729 for sale in Paris, as well as the AR (Augustus Rex) monogram incised to the back. This latter mark is exceedingly rare, and was added in 1734 by Augustus III, the son of Augustus the Strong, to certain pieces seized from Lemaire and von Hoym which he wished to be conserved in the royal collection.

Count von Hoym and Lemaire were both imprisoned by Augustus III. Lemaire managed to obtain the intervention of the French government, and was released. He fled to Regensburg and his subsequent activities are lost to history. Von Hoym was less fortunate: he remained in prison, where he committed suicide in 1736. The Meissen manufactory flourished, partly because of the French trade sparked by Lemaire’s imitation Kakiemon wares, continued by Lemaire’s business partner, Jean-Charles Huet. And pieces such as the present plate have become highly collectible, rare testimonies to an affair that would mark the history of porcelain.